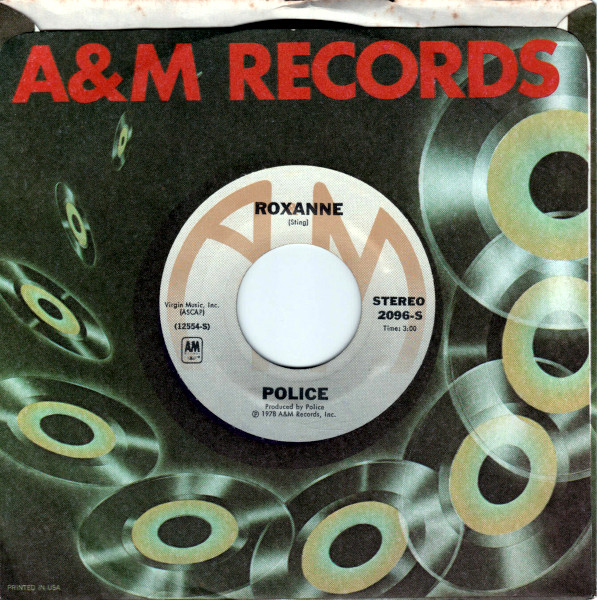 With a visually arresting video, this song announced there was a new sheriff in town and his name was Sting.

Kronomyth 0.5: Infinity captured in the bee’s brief visit to a flower.*

The first time I heard this song, I didn’t actually hear it at all. A video of Roxanne was playing in a department store called Caldor’s (they went out of business in 1999) and the image of three blonde-haired men playing reggae stopped me in my tracks. Needless to say, I bought Outlandos d’Amour soon after through the also-long-defunct RCA Music Service. I’m full of nostalgia today.

“Roxanne” is an amazing example of tension and release. The main verses are impossibly tightly wound and the chorus explodes in a burst of (what then would have been considered) punk. It’s a testimony to the song’s genius that I’ve heard it hundreds of times and still never tire of it. “Roxanne” sounded like nothing before it. That is until Joe Jackson arrived, and then I had two new reasons to be happy (thankfully, I already had Elvis).

Sting and the boys, surprisingly, didn’t generate a lot of buzz with this single the first time around. But The Police‘s music was slightly in front of their image which, when that arrived, catapulted “Roxanne” into the Top 40. Most of the world got a tasty side of Peanuts with their single, an early raver that runs mostly off of Stewart Copeland’s kinetic energy. In the US, we got stuck with Dead End Job, a forgettable song seemingly scribbled out between periods that features Andy Summers reading job ads at the end. The fact that someone reading job posts from the newspaper is the most clever aspect of the song tells you all you need to know.

One of the more embarrassing mondegreens from my youth is the line “I won’t share you with another boy,” which I heard as “I was gaying with another boy.” In my defense, I was listening to a lot of David Bowie, Elton John and The Kinks at the time.