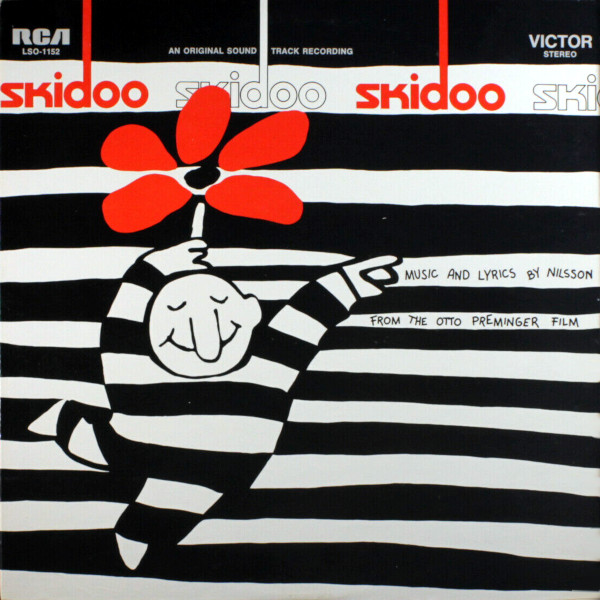 The soundtrack to Otto Preminger’s star-studded misfire, in which Jackie Gleason drops acid and Nilsson drops a few new tunes.

The ‘60s produced some really wonderful and silly films, from It’s a Mad, Mad, Mad, Mad World to Dr. Strangelove. Otto Preminger’s star-studded Skidoo looked to follow in those footsteps but, like a lot of his later movies, was more or less a flop; this despite featuring a cast that included Jackie Gleason, Frankie Avalon and Groucho Marx. The film also included a score from up-and-coming musical artist, Nilsson, who also appeared in the film briefly and joined Preminger for a publicity tour that landed him on a television program with Hugh Hefner at Playboy Mansion (which arranger George Tipton presumably watched from home while eating a bowl of Spaghetti-Os, but more on that later).

I haven’t watched Skidoo all the way through because it’s hard to follow, there are too many characters and I can only listen to Carol Channing’s voice for so long. (My version of Hell involves me being locked in a room with Carol Channing and Fran Drescher during a catfight.) I have listened to Nilsson’s soundtrack several times, since Carol Channing only sings on one track, and then only at the end. One slice of strawberry tart without so much rat in it later, I was left hungry for more of Nilsson and had my fill of incidental movie music, most of it arranged very nicely by Mr. Tipton.

There are only a few songs on this record, including The Cast and Crew, which is one of the more clever film title treatments you’ll ever hear, as Nilsson literally sings the credits that appear at the end of the film. Strangely, this is the soundtrack’s opening song, although I can understand their excitement in wanting to unveil it first. I Will Take You There is the best song on the album, just the sort of thing you would expect after listening to his second album, Aerial Ballet. A few commercial bits follow, none as clever as The Who’s radio spots on The Who Sell Out, with the rest of side one featuring Tipton’s arrangements of Nilsson’s melodies, including the main Skidoo theme.

Side two starts out with a clever throwaway, Garbage Can Ballet, before returning to the instrumental film score. Tony’s Trip is an interesting journey, not unlike the music of Tangerine Dream, but the rest of the music is your garden-variety film soundtrack. The album ends with a vocal version of Skidoo featuring the inimitable Ms. Channing in what has to be one of the more bizarre endings to any film. They don’t make movies like this any more, which I suppose is something to be thankful for.

I do have fond memories of watching The Point as a kid, and I would point you there first if you’re looking for a Harry Nilsson soundtrack. Skidoo just has a couple of clever songs and a lot of instrumental arrangements for orchestra. In fact, George Tipton probably should have received at least co-billing on this album, since he seems to do the lion’s share of the work on it. But everyone was talking about Nilsson, not his arranger, so he got the kudos for Skidoo. These days, completists can pick up both soundtracks on a single disc and that’s the better investment in money if not in time.

Music and lyrics by Nilsson. Arranged and conducted by George Tipton.

CD reissue bonus track
13. I Will Take You There (alternate mix)