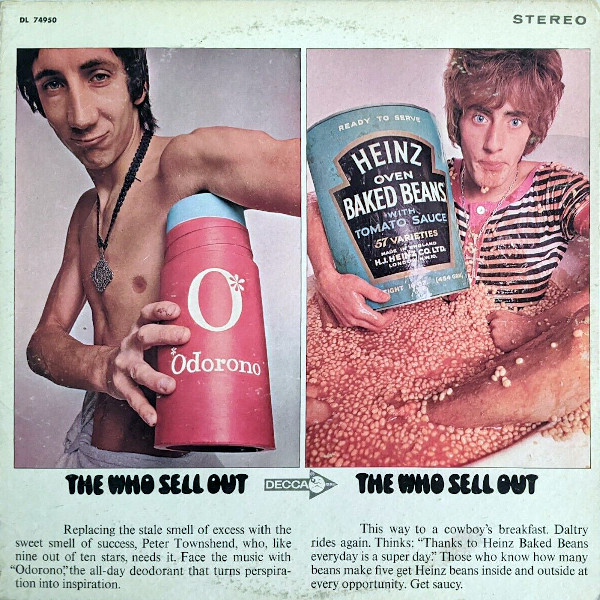 The band’s brilliant third record has some real gems sandwiched between radio commercials.

Kronomyth 3.0: Jingles all the way, oh what fun it is to ride with The Who.

The Who Sell Out is something else, a kinked-out collection of swell songs wrapped in a radio commercial concept that was, ironically, a pretty uncommercial approach. How do I describe the wonder this album inspires? Let me count the days…

MONDAY: I revel in the acquisition of a cornerstone classic, “I Can See For Miles,” a relentless rocker that won’t quit.

TUESDAY: “Our Love Was, Is” arrives in a torrent of emotion, love’s revelatory powers unleashed.

WEDNESDAY: “Armenia City In The Sky” comes crashing out of the speakers as if Famine, Pestilence and their mates had traded in their old horses for shiny new psychedelic motorbikes.

THURSDAY: And then I suddenly seen “Mary-Anne With The Shaky Hands.” Can’t believe this didn’t floor me on the first go ‘round. Like “Sunset Afternoon,” there’s just no shaking its sunlight.

FRIDAY: The disc that keeps on giving! “Tattoo” is an achingly sweet remembrance of youth, a paean to the impetuous acts of innocents (at least that’s how I’m explaining mine).

SATURDAY: “I Can’t Reach You” finally does, its plea to be loved heard at last.

SUNDAY: I set sail with “Rael” from a warm surf, letting the song bring me home even as half of me lingers on its lost island.

Thus ends the tour of Sell Out’s seven wonders, noting as I write this that there really isn’t a “week” song in the show. The commercials are clever, sometimes fleshed out into actual songs (“Odorono,” “Medac”), sometimes uncredited segues between songs (such as the fake radio ID spots). It’s a remarkably ambitious record in scope and sound, a rare case where The Who embraced the styles of other bands (Pink Floyd, The Beach Boys, The Kinks). A Quick One quickly found itself back on the shelves, but The Who Sell Out remains in regular rotation on my internal radio right along with Who’s Next and Who Are You.