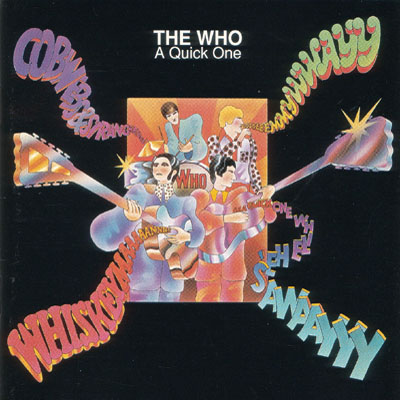 The band’s second album is light on great material but heavy in everything else.

The least essential of The Who’s early albums is still awfully good… and awfully loud. The arrangements are so striking and unusual they often overshadow the songs themselves. The Who push the drums past all levels of decency on the Keith Moon-penned “I Need You,” John Entwistle’s low bass and lower vocals rumble with sinister intent through “Boris the Spider,” and Pete Townshend crams six songs into the fascinating collision of “A Quick One, While He’s Away” (an early, abortive amalgam of storytelling and rock).

Unlike its American counterpart, titled Happy Jack to cash in on that single’s success, the UK release didn’t include a bonafide hit (“Boris the Spider” is the record’s most recognizable track). What it does include are tracks you seldom here anymore. “Run, Run, Run,” “So Sad About Us” and “Whiskey Man” are worth rediscovery for fans, but would fall outside any discussion of The Who’s most enduring work. A Quick One finds the band looking to push the boundaries of popular music while still confined by rock’s conventions (e.g., a warmed-over cover of “Heatwave”).

The remastered 1995 version is wonderfully annotated and spotlights the saturated noisiness of the original tracks, adding most of the Ready Steady Who EP released soon after. In addition to a swell cover of Jan and Dean’s “Bucket T,” the bonus tracks include forgotten gems like “Disguises” and “Doctor, Doctor.” For most listeners, hearing A Quick One will feel like opening up an old toy chest. Some items are ripe for reclamation, others we’ve outgrown, but there’s still fun to be had here.

* On the US version (Happy Jack), “Heatwave” is replaced with “Happy Jack,” which appears after “Cobwebs And Strange” at the end of side one (A6).

* On the expanded compact disc, “Bucket T” is erroneously credited to “Altfield/Christian/Torrence.”