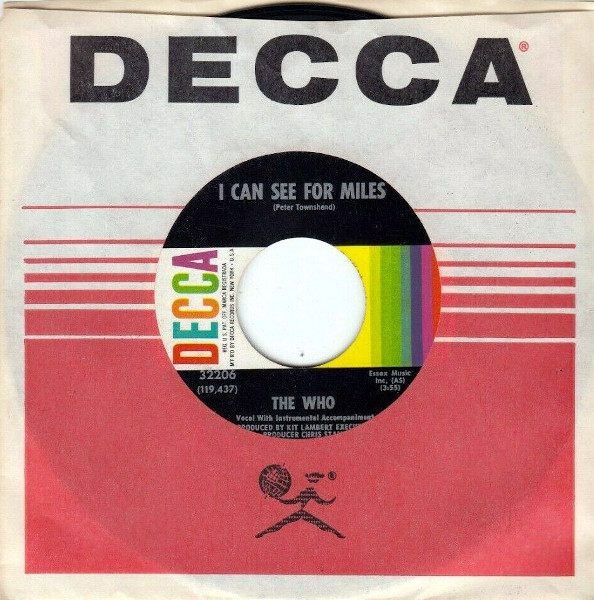 Pete Townshend writes a song for his wife-to-be that makes “Suspicion” sound like a love letter.

The original single version of “I Can See for Miles” dances on a razor’s edge. The harmonies on this are just amazing, and the whole effect is even more menacing than “My Generation.” Pete Townshend himself has always held the song in high esteem, and I would agree that, sonically speaking, it’s the band’s greatest achievement to date. Everything just clicks on this record: the drums, bass, guitars and vocals. Paul McCartney was inspired enough by the effort to write an even scarier song, “Helter Skelter.”

Track and Decca chose different B sides for the single. “Mary-Anne with the Shaky Hands” appears here in a longer but not necessarily better version. The band tightened it up for the album, The Who Sell Out, de-emphasizing the bass and getting rid of the annoying reverb. In the UK, Entwistle’s “Someone’s Coming” provided the perfect stalking companion. Sweet vocals from Roger Daltrey and catchy horns can’t hide the fact that the girl’s disapproving parents probably know best.

The Who, in my opinion, never got enough recognition for their brilliant harmonies. Daltrey is even quoted as saying that The Who “shit” on the Beach Boys in terms of harmony. (I know, sometimes it’s hard to believe such lovely sounds came out of that mouth.)

*Listed as “Mary-Ann with a Shaky Hand” on the French release.

* Yes, they misspelled his last name.