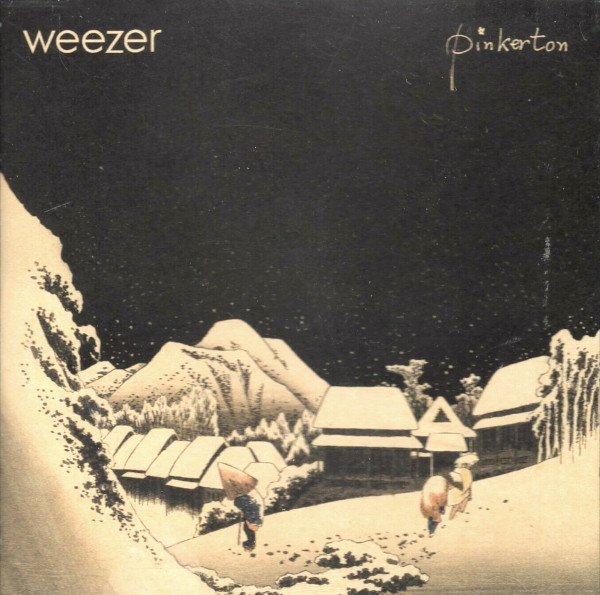 Weezer’s second album is a cautionary tale for critics. Originally dismissed as a self-piteous sophomore slump, it re-emerged from its chrysalis under new critical light years later to be vaunted as one of the greatest albums of the 90s. Oddly, Rivers Cuomo’s own appraisal of the album has followed a similar arc. I’m afraid I don’t have anything quite so dramatic to offer. The first few times I listed to Pinkerton, I was bored with it, but the songs grew on me over time to the extent that I now enjoy this album a lot as a dark, moody and different approach to the music of their first record. You have to wonder if the critical turnabout wasn’t simply the result of not having listened to the album enough before passing judgment.

The album takes its title from the character of B.F. Pinkerton, the American naval officer in Giacomo Puccini’s Madame Butterfly, which Cuomo had been listening to of late. Disillusioned with being a rock star, Cuomo set out to write a loose sort of rock opera around the theme of a lonely, bored American interested in a young (eighteen-year-old, Cuomo carefully points out) Japanese girl. Sounding at times like a power pop version of Radiohead, the songs clearly confounded critics and fans who expected a second round of sweater songs and buddy hollies. The decision to release El Scorcho, one of the album’s weakest tracks, as the advance single for the album was a conscious attempt by the label to present Weezer as still being a fun, irreverent band. It backfired.

Collectively, the songs on Pinkerton are slices of the same mood. They’re fast, catchy (but not obvious), cranky, self-deprecating and sometimes brutally honest. And, like Radiohead, the songs grow on you over time. The first time I listened to Pinkerton, the only song I loved immediately was Pink Triangle. It’s the closest thing on here to a hit single. With time, however, I found the beauty in Why Bother and Across the Sea and began to dig Falling for You, Getchoo and Tired of Sex. I’ve haven’t come around to “El Scorcho” or Butterfly yet, but I might in the future.

The only complaint I have with Pinkerton is that Cuomo overshadows the band. The contributions of Brian Bell, Matt Sharp and Patrick Wilson don’t seem to matter as much this time. In fact, you get the sense that Cuomo could have made this album on his own and may even have preferred it that way. There’s a loneliness on Pinkerton that is deeper than anything he felt in the garage. Any album that can make you feel bad for a rock star attending Harvard University must be deeply affecting on some level.