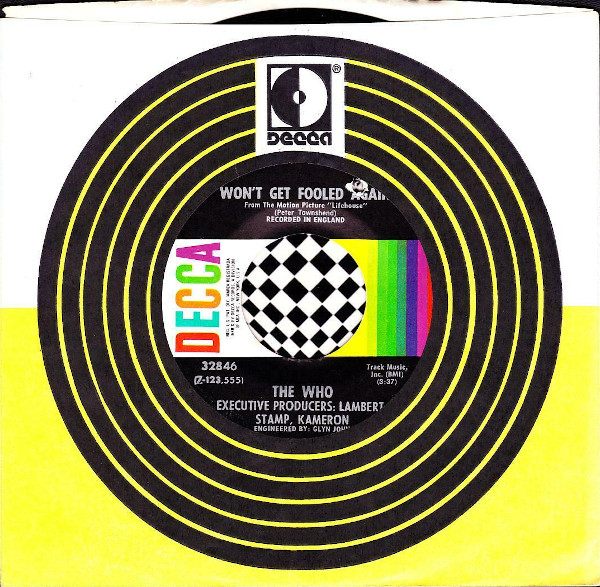 The unofficial theme song for every presidential election since 1972.

Pete Townshend’s Lifehouse died on the vine, but not before yielding a beautiful blossom, “Won’t Get Fooled Again.” They should make it a law to play this song at every presidential inauguration. The single, released ahead of Who’s Next, is credited to the motion picture, Lifehouse, which instead was replaced with the motion picture, Tommy. Apparently, many were unclear where Tommy ended and Lifehouse began.

The single version is, in fact, a brutally edited version of the album track that later appeared on Who’s Next. It’s a hatchet job, and you’d be much better served by hearing the song in its entirety. The B side, “I Don’t Even Know Myself,” is a country-rock song in the same vein as “Now I’m A Farmer” but not as hokey (“Farmer” was intended for Lifehouse, and plays out more like a staged musical number than a rock song.)

“The oppressed are allowed once every few years to decide which particular representatives of the oppressing class shall represent and repress them in parliament.” – V.I. Lenin

And, yes, the song refers to revolution not election, so the Lenin quote isn’t really appropriate (although what is an election but a peaceful revolution?). One site on the Internet seems to have erroneously translated the Lenin quote, “Give me four years to teach the children and the seed I have sown will never be uprooted” as “Give me your four-year-olds and in a generation I will build a socialist state.” Had they mixed those two translations together, that would have been an oddly more appropriate quote.