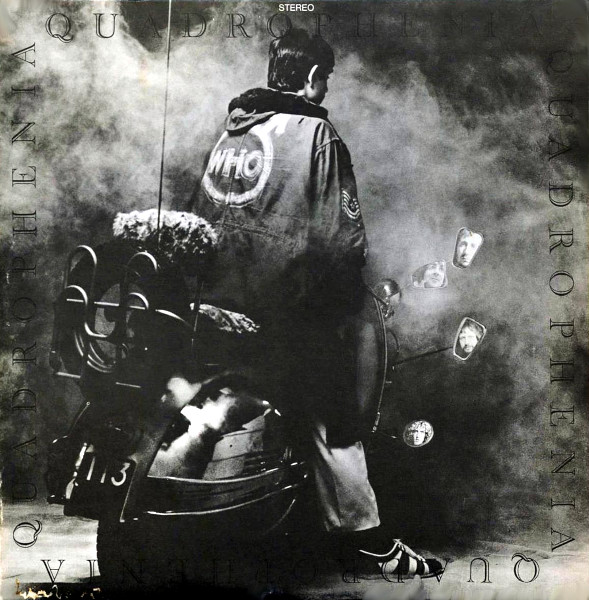 Sea, feel and hear the story of a misguided mod with multiple personalities in Townshend’s true masterpiece.

At the time, Tommy was probably the most ambitious rock album ever made. Several years and a second failed concept album (Lifehouse) later, Pete Townshend undertook an even more ambitious project, Quadrophenia. Like Tommy, the story of Quadrophenia centers on an isolated outcast whose personality is split into four identities—not coincidentally the number of members in The Who, although the four channels featured in the novel quadrophonic stereo recording process also factor into the story.

In many ways, Quadrophenia is even more ambitious than Tommy. The opening “overture,” which uses snippets of the songs to come that drift in from the surf, is remarkably inventive. A more proper overture of sorts appears with “Quadrophenia,” revealing painstaking orchestration, much of it played by Townshend himself. Along the way, The Who drop some of their best and heaviest songs to date: “The Real Me,” “5:15,” “Doctor Jimmy” and the climactic ending, “Love Reign O’er Me.” It’s hard to listen to this album and not lament what Lifehouse might have been.

Quadrophenia has gathered a legion of fans over the years, many of whom no doubt have fond memories of sitting cross-legged in their rooms with the forty-plus-page booklet spread wide in their lap and imagining how the music and the story aligned. In that sense, Quadrophenia is an easier story to follow than Tommy. It tells the tale of a troubled youth (“The Real Me”) who toys with the idea of settling down into a normal life (“Cut My Hair”), joins a new group of Mods in the hopes of finding himself (“I’m One,” “I’ve Had Enough”), has a moment of existential crisis on a train ride (“5:15”), loses his hero (“Bell Boy”), unleashes his dark side (“Doctor Jimmy”) and finds his final rest in the realization that love is the only thing worth living and dying for. I’m sure I left some stuff out in between, but you get the idea.

As someone who has listened to The Wall, like, a million times, it seems clear to me that Bob Ezrin and the band patterned their album on Tommy and Quadrophenia. I never hear “Helpess Dancer,” for example, without also hearing “In The Flesh.” Whether or not you believe Quadrophenia to be the best concept album ever recorded, and some do, it certainly belongs at or near the top of the list. Song for song, Who’s Next is stronger, I’ll give you that. A lot of Quadrophenia sounds like the oft-reviled Who By Numbers, particularly when Pete sings lead (“Cut My Hair,” “I’m One”). If this album sags from time to time, it’s necessary to move the story forward, and at no point is Quadrophenia ever a song or two away from some minor miracle of rock music.

So, in summation: Best story? Quadrophenia. Best arrangements? Quadrophenia again (“The Rock” deserves its own symphony, in my opinion). Best collection of songs? Who’s Next. Best showcase for the band? Honestly, I’d go with Tommy on this count. Quadrophenia is clearly the product of Pete Townshend’s personality, not a showcase for the band’s different personalities, which rose more to the fore on Tommy, from Daltrey’s brilliant performance as the ersatz Tommy to the vocal cameos from John Entwistle and Keith Moon. Entwistle does provide quite a few horn sections on Quadrophenia, and Moonie sings on “Bell Boy,” but the genius of Quadrophenia is the genius of Pete Townshend.

All selections written by Peter Townshend.