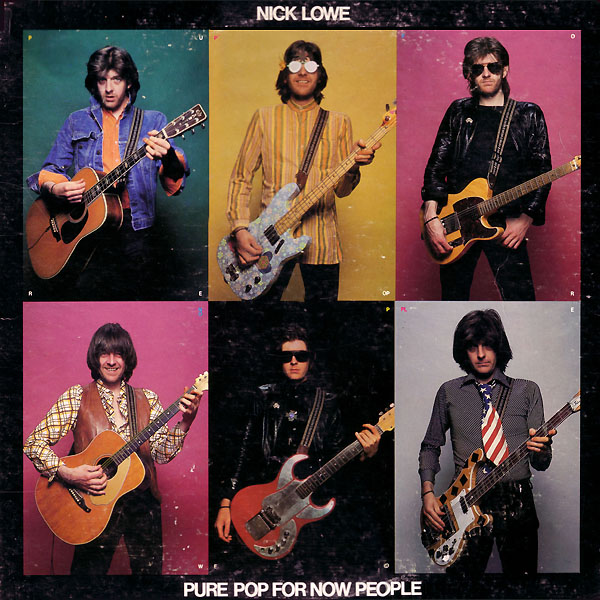 The man from Stiff turns out to be surprisingly flexible on his first (and arguably best) album.

Columbia tinkered a bit with the track selection on Nick Lowe’s first album and gave it a title only an advertising executive could love, Pure Pop for Now People. If the title was tongue in cheek, then the music on Pure Pop was even cheekier: songs about dead film stars, castrated dictators and the Bay City Rollers delivered with enough delicious hooks to please the purest popophile. The lyrics didn’t always add up, but it didn’t matter; Lowe was already serving up the next sweet treat before you could count the calories.

In my opinion, Lowe’s first two albums stand tall in the first wave of new wave. He was too clever for pop, too cute for punk, yet struck an artful balance that connected the past to the future. Maybe it’s not surprising for someone who has cited Jim Ford as an influence (Ford’s “36 Inches High” appears here) and produced one of the first punk groups, The Damned. Personally, Lowe’s affection for rockabilly is one I don’t share. “They Called It Rock,” credited to Rockpile, and “Heart of the City” are spot on, but the highe points for me are the pop songs: “The Rollers Show,” “So It Goes,” “Tonight,” etc.

Although the album is credited to Lowe, Pure Pop could rightly be called a Rockpile record. Billy Bremner, Dave Edmunds and Terry Williams all appear here, as do members of The Attractions, The Blockheads and The Rumour. Together with the early Dave Edmunds records and Rockpile’s one entry, Seconds of Pleasure, you’ve got a cornerstone in your English new wave/pop collection (the other stones being Elvis, JJ and Graham Parker). What you’ll get from Lowe is more variety, less vitriol and a sense of humor and humility.

I’ve saved a separate entry for Jesus of Cool, the original UK version, but the differences are slight. Pure Pop has a better opener, “So It Goes,” and includes the timeless “Rollers Show.” Both elpees are a treasure trove of late 70s new wave/power pop songs. If you haven’t had the pleasure, act now. And if you’ve already enjoyed them, seconds are always in order, even if they’re slightly out of order.