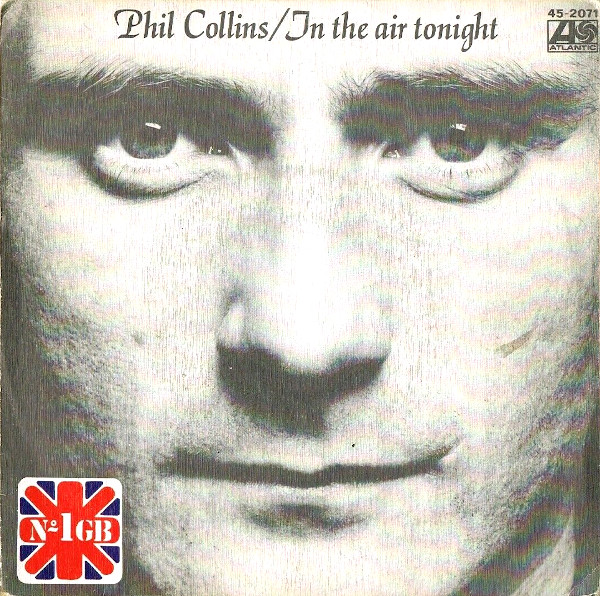 Kronomyth 0.1: Sans Andrea’s fault (or I’ll have a tom-tom collins).

“In the Air Tonight” introduced the world to Phil Collins the solo artist. Suffice it to say he made a good first impression. Phil’s first solo album was largely patterned after Peter Gabriel’s third solo album, and “In the Air Tonight” borrowed what was best about “Biko” (its quiet intensity) and added some amazing drums to it. Forty years later, the part where the toms come in at 3:15 still gives me chills.

The song is so affecting that it spawned its own urban legend about Phil confronting someone who had watched another man drown. The song, in fact, is about Phil’s divorce. Most of his songs are about his divorce. I’ll bet that wears thin fast in a cocktail conversation. (Phil: “You know she left me for the painter.” You, looking at your watch.)

The single version of “In the Air Tonight” is noticeably different than the elpee version, with a darker sound and more drums. I know, I just wrote “more drums” like that means anything. In the opening, you can hear what sounds like a snare drum with its wires loosened. There, that’s a little better.

The flip side, “The Roof Is Leaking,” points back to the tragic storytelling of Peter Gabriel’s second album (“Home Sweet Home,” “Indigo,” “Mother of Violence”). The instrumentation is very different than the A side, although it still favors a very open sound. While it would be a stretch to say that no two songs on Face Value sound alike, the distance between “In the Air Tonight” and “The Roof Is Leaking” is a fair indication of the album’s surprising range.