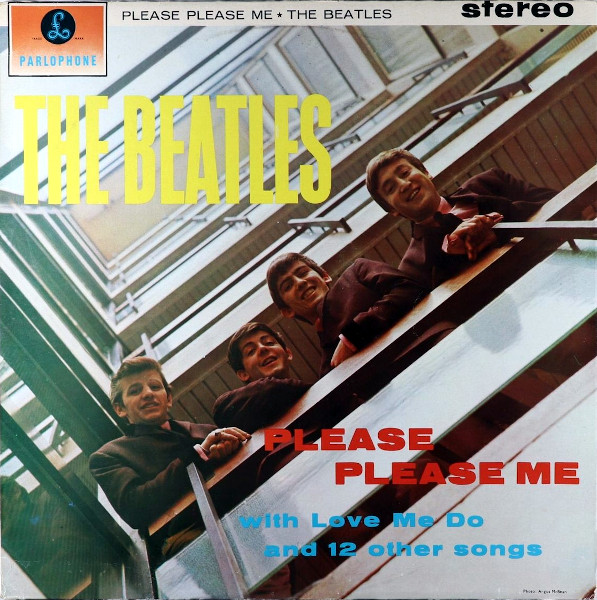 Elvis Presley and The Everly Brothers wrapped into the ultimate boy band.

I’m nervous about writing a review of this album, since The Beatles’ fans are a well-informed and unforgiving lot. So let’s not bicker and argue about who played what, and have pity on my pathetically inadequate discography. If you agree that The Beatles are the greatest musical group of all time, and I’ve never heard a cogent argument to the contrary, then Please Please Me must be the greatest debut album of all time. Certainly, it has every ingredient for greatness: timeless hits, brilliant original material, top-notch production, and impeccable taste in covers.

Elvis Presley had rock & roll charisma and energy. The Everly Brothers had harmonies that made your knees buckle. The Beatles had all that plus boundless creativity and four unique personalities in John, Paul, George and Ringo. By the album’s fifth track, Boys, all four of the boys had taken their turn at the microphone: Paul McCartney on the rock & roll raver, I Saw Her Standing There; John Lennon on the downbeat Misery and Anna (Go to Him); George Harrison’s cameo on Chains; and Ringo Starr on a rocking cover of The Shirelles’ “Boys.” You just didn’t see or hear anything like that before The Beatles: four musicians who could sing, play their instruments well and write original songs. It was, if not a perfect democracy, at least a benevolent oligarchy.

Although The Beatles would move away from cover songs with time, they were connoisseurs of the contemporary R&B scene, plucking gems like Arthur Alexander’s “Anna,” The Isley Brothers’ Twist and Shout, Lenny Welch’s A Taste of Honey, and The Shirelles’ Baby It’s You. In some cases (e.g., “Twist and Shout”), their versions were daring revisions that dwarfed the originals. You could argue that The Beatles were stealing songs from black artists, but since some of those songs were written by white songwriters, you’d sort of end up in an endless circle of finger-pointing, and I’m sure you have better things to do with your fingers.

As a peace offering to fans of The Rolling Stones, I’ll concede that Please Please Me has perhaps one too many sha-la-la’s, de-doo-de-doo’s and whoa-whoa’s to make all but the most buttoned-down man comfortable. None of those things, however, substantially detract from the fact that Please Please Me raised the bar for rock and roll like nothing before it. From the perspective of musical history, it often feels like time can be divided into B.B. (Before the Beatles) and A.B (After the Beatles), with this album marking ground zero. Then again, I was born in the 60s, so maybe that’s just my impression.

A1. I Saw Her Standing There
A2. Misery
A3. Anna (Go to Him) (Arthur Alexander)
A4. Chains (Gerry Goffin/Carole King)
A5. Boys (Luther Dixon/Wes Farrell)
A6. Ask Me Why
A7. Please Please Me
B1. Love Me Do
B2. P.S. I Love You
B3. Baby It’s You (Mack David/Barney Williams/Burt Bacharach)
B4. Do You Want to Know a Secret
B5. A Taste of Honey (Bobby Scott/Ric Marlow)
B6. There’s a Place
B7. Twist and Shout (Bert Russell/Phil Medley)