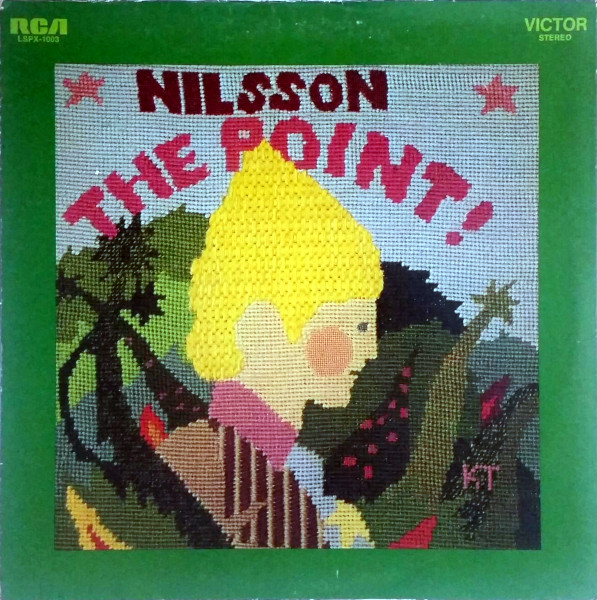 Nilsson’s pointed commentary about a boy and his dog is the best story/album this side of Teaser and the Firecat.

The Point! is an album and accompanying animated film featuring the music of Harry Nilsson. Although ostensibly made for children, the album/film is also a pointed commentary on how society rejects people and ideas that are different from the norm. Through society’s lens, what seems to be pointless may actually have a point, while things that seem to have a point may actually be pointless. It’s an idea that the film makes a point of repeating, over and over and over and… well, you get the point.

This film originally aired on February 2, 1971 on ABC. I was fortunate enough to see that version, as it was the only one to feature the narration of Dustin Hoffman. Because of licensing issues, subsequent re-broadcasts had to use different narrators, eventually settling on Ringo Starr. The Beatles connection doesn’t end there, as the animation for The Point! was clearly influenced by the animated film, Yellow Submarine. The animation isn’t nearly so sophisticated, but the trippy sequences (e.g., during Think About Your Troubles) are similar.

I would tell you that the real story here is the music, only it isn’t. The narration and the music are halves of the same (sea of) whole. It’s really a perfect balance: two minutes of music, two minutes of engaging storytelling as the music from the last song plays quietly in the background. From the opening Everything’s Got ‘Em, Nilsson and arranger George Tipton create a charming Pepperland peopled with polite piano melodies, well-mannered orchestration and rich layers of vocals (while shedding a few of the extra layers from his last album, Nilsson Sings Newman). The album’s most famous track is Me And My Arrow, which joined the ranks of Nilsson’s growing army of Top 40 hits. The rest of the songs, if not as instantly memorable, are in the same general vicinity in terms of quality and execution. Poli High takes a playful poke at sports, and “Think About Your Troubles” contemplates the journey of sea water into tap water (a device that would re-appear on “The Moonbeam Song”).

The second side features Life Line, a dreamy number with a wonderful arrangement from Tipton, the listing P.O.V. Waltz and Are You Sleeping? These songs are more philosophical than the opening tracks as Nilsson brings the point of his story home. Despite a few unnatural devices that move the main character, Oblio, along the story—the useless Pointless Man, their abduction by a giant bird—the narrative holds together. The closing “Are You Sleeping?” even works on two levels: as a love song and as a logical close to a film that starts with a father telling his son a story.

The Point! is a very different animal than Nilsson’s soundtrack to Skidoo, which featured relatively few songs and does not stand up as an album of new music from Nilsson. In fact, little Oblio’s pursuit of a point may be Nilsson’s crowning creation to date, at least in terms of imaginative entertainment. Harry and Nilsson Schmilsson are better albums, musically speaking, but The Point! better bespeaks the creative genius of Harry Nilsson. Firty years later, I still fondly remember the story of Oblio. As for Nilsson’s next film project, Son of Dracula, as the French would say, il vaux meilleur oublier.