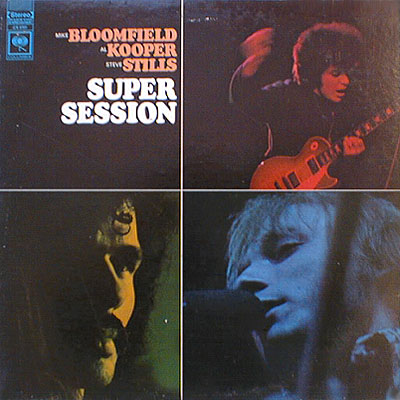 One of the great blues-rock jam sessions on record. Apparently. Like jazz, this stuff tends to go in one ear and out the other for me, whooshing through my head with a taunting whisper. I guess you had to be there, or be there and somewhere else at the same time, where the pungent playing of Mike Bloomfield tugged at your aura like a fly caught in a web. Given the small space I’ve cleared out in my life for blues-rock, I can do just fine with a handful of recordings from The Paul Butterfield Blues Band, Jimi Hendrix, Cream; no need to super-size that selection, I say. But blues-rock was a burgeoning field in 1968, and Super Session did become an important part of the original blueprint. No matter that they never did build that house to the scale they first imagined, the idealism of it is still intoxicating. The record is split between two sessions; the first with guitarist Mike Bloomfield, the second with Steve Stills. Both sessions are cited as spontaneous with horns added later to flesh things out (Al Kooper could never leave things well enough alone). Some of the songs feature vocals by Kooper, a middling singer who does manage to energize Donovan’s “Season of the Witch.” The initial attraction for me was to hear Steve Stills let his hair down and cut loose with some great soloing, which doesn’t happen. The instrumental heavyweights here are Bloomfield and Kooper, the latter lighting the material on fire with his organ and, on “His Holy Modal Majesty,” a weird device called the Ondioline that sounds, I kid you not, like bagpipes in space. Super Session is certainly no mere jam session—in walking through Hendrix’ abandoned cupboard you won’t find any tastier jams—but I don’t see God in the details either, and apparently some did. The production and engineering are excellent, one of the best-preserved artifacts from the ‘60s, so plunking down cash for the CD (or MFSL remaster) is advised if you’re planning on taking a trip with Super Session.