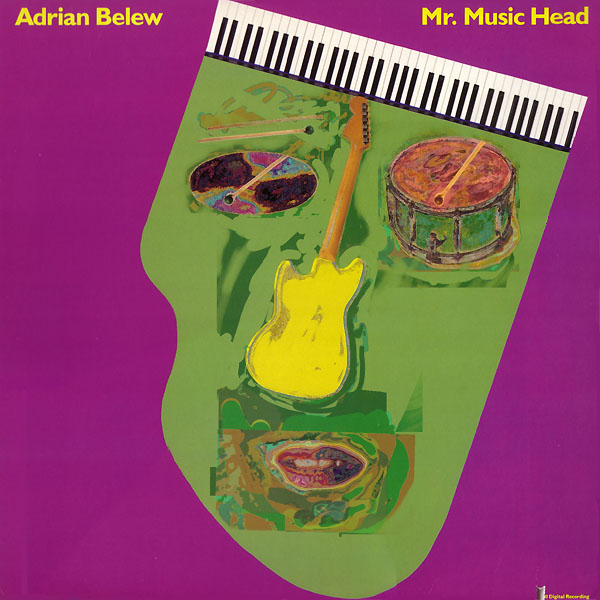 The album that contained the likeable and oddly prophetic “Oh, Daddy,” plus the usual assortment of warped pop songs.

Having exercised his artistic demons by chasing his tail for a good forty minutes, Adrian Belew returns to his natural melyew: the digital pop jungle. Mr. Music Head even contained an actual hit, “Oh Daddy.” Throughout, I’m reminded of another pajama’d pop star, Paul McCartney, especially on the nearly perfectly postscripted patchwork of playful pop genius, “1967.”

The first side of the album is from the same family tree as Lone Rhino and Inner Revolution, with plenty of animal mimicry along the way. Adrian wades a little too deeply into the woods beginning with “Peaceable Kingdom,” but the first five tracks are right in lynne with what you’d expect from the author of “Big Blue Sun.”

Unlike his first two albums, which were strung-out showcases, Mr. Music Head is an ivory merchant, as likely to peddle pop songs written on the piano and peopled with Belew’s guitarzan zoo of animal noises. If The Bears taught us nothing else, it’s that Belew is more bearable on his lonesome than playing all cutesy in a quartet of like-minded popophiles. Young Lions and Inner Revolution got a lot right and, together with this album, began to deliver on the honeyfied pop music that The Bears appeared to be after.

Both Music Head and Revolution, while DIY albums, have more musically going on than most Bears tracks, suggesting that Belew was confined in a normal setting. He runs free here, right into the arms of Jeff Lynne and Paul McCartney most of the time, but sets enough boobytraps to keep listeners on their toes.

All songs written by Adrian Belew unless noted.