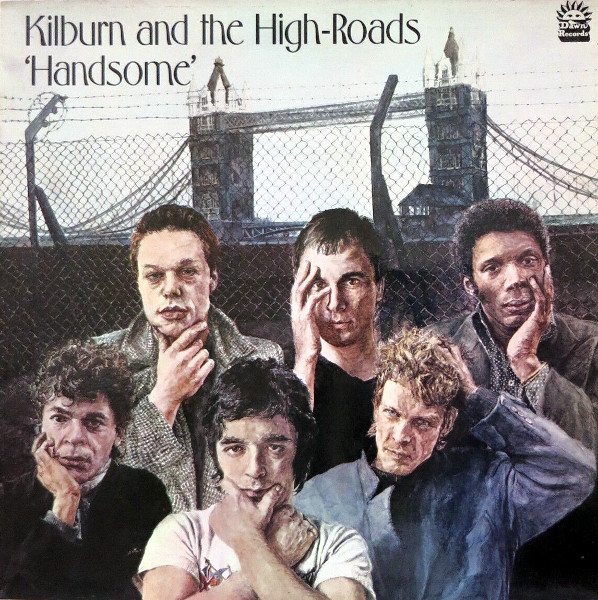 A dozen roadses from one of the principal purveyors of English pub rock.

Kilburn and the High-Roads were one of the earliest and cleverest of the English pub-rock bands. After several years and several lineup changes, the band finally got a recording contract and recorded their first album. Unfortunately, Handsome wasn’t released until the following year, by which time the group had disbanded. Although the album didn’t chart, it remains a fine testament to a great band that had an audible influence on Madness and, of course, Ian Dury and the Blockheads.

A good half of the songs on Handsome could be described as traditional rock & roll with an eccentric singer and a splash of saxophone, piano and/or guitar in the right places. The better half of Handsome, however, occurs when the band’s matches their loopy lyrics with equally loopy arrangements. The Roadette Song, an inspired ode to a female groupie, and Pam’s Moods (written for henpecked husbands everywhere) are brilliant. So too the bookend of Father and Thank You Mum, the latter one of two songs sung by the new piano player, Roderick Melvin. (Most of the songs here are holdovers from the previous version of the band featuring Russell Hardy on piano.) Listening to these tracks, it’s not hard to hear where Madness found their inspiration.

The rest of the record has its moments too. Both Upminster Kid and Rough Kids are solid rock & roll songs, and tunes like Broken Skin, Patience (So What?) and the calypso-inspired The Call-Up strike a nice balance between melody and mischief. It’s a shame that Kilburn and the High-Roads didn’t last long enough to take a bow, though Dury and saxophonist Davey Payne stuck around for the successful sequel, Ian Dury and the Blockheads, while guitarist Keith Lucas re-emerged as Nick Cash in the punk rock group, 999. If you enjoy the Blockheads and Madness, the first (and only) Kilburn and the High-Roads record is definitely a road less traveled but just as interesting.

All songs written by Ian Dury and Russell Hardy unless noted.