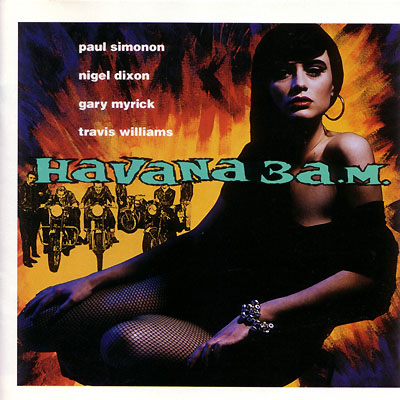 Picking up where the multicultural melange of The Clash left off, Paul Simonon rides into the sunset on this better-than-expected effort.

Let’s face it: Clash fans were the only folks who were going to get out of bed to hear Havana 3 A.M. And what they awoke to was the spaghetti western rockabilly reggae revolution last heard on clashics like “Drug-Stabbing Time” and “Brand New Cadillac.” I don’t make the comparison lightly; Clash fans will definitely get a charge out of this.

If these songs had come from Strummer’s quarters, I’d be praising him as the better half of his former band (BAD adopted a confounding antirock stance). Instead, because Paul Simonon is the only connection to The Clash, I waver between whether Nigel Dixon’s vocal similarity to Joe Strummer is fortune or fraud. If you can get past that, it’s a nice ride in front of you: “Reach The Rock,” “Surf in the City,” “Joyride,” “The Hardest Game.” Had these been slipped into, say, Sandanista, everyone would have been happier and no one the wiser.

The Clash were a restless lot, unable to sit still for long, but the lads of Havana 3 A.M. aren’t itching to change horsepower in midstream. Songs end like they begin, there’s no sloppy banter in between, none of the inspired, unscripted interplay that you’d find between Strummer and Jones either. This is rockabilly punk played south of the border with a ganja twist, mixed in varying degrees from track to track so that you get everything from very spaghetti instrumentals (“Hey Amigo”) to Latin reggae (“Living In This Town”). Honestly, my initial interest in Havana 3 A.M. was archival, a nagging question mark next to (and below) the solo music of Joe Strummer. Instead, Havana 3 A.M. is the place to be if you miss the spanish rockabilly of The Clash.