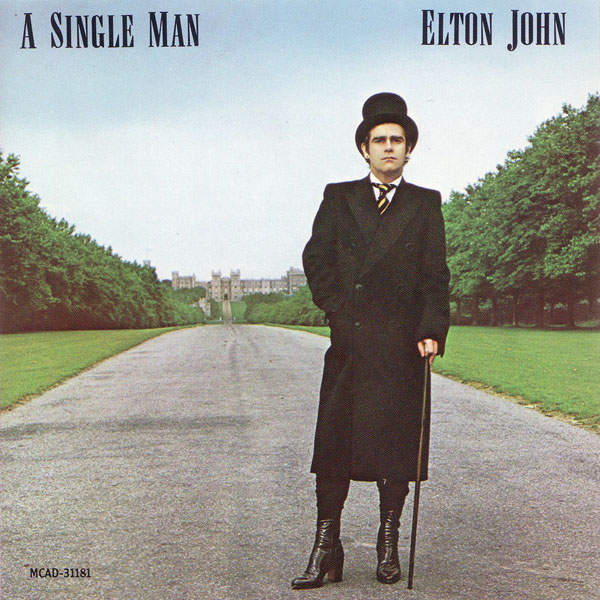 Elton gets a new lyricist and a new tailor, but it speaks volumes that the second single was an instrumental.

This is the first Elton John album without lyricist Bernie Taupin, and the last Elton John album of any real rock merit. Disco was beginning to creep into the mix, evidenced on the hit “Part-Time Love,” but like the later (actually, earlier) “Mama Can’t Buy You Love” confirmed, it wasn’t such a bad milieu for the well-manored maestro.

A Single Man could be seen as an extension of his second-phase 70s albums: Goodbye Yellow Brick Road, Captain Fantastic, Rock of the Westies. Those were better efforts, but audibly the work of the same artist. Here you have ballads (“Shine On Through”), faux island music (“Return To Paradise”), Kink-y humor (“Big Dipper”) and rock with strings (“I Don’t Care”). The epic “It Aint Gonna Be Easy” is another winner, the peak of intensity kept at a cool flame.

New lyricist Gary Osborne isn’t a liability. Taupin’s dark character studies are missed, but as Blue Moves proved, it took more than words to move the machine. Also featured here is a possible homage to David Bowie, “Shooting Star,” which sounds for the life of me like “Wild Is The Wind,” and his only instrumental hit, “Song For Guy.” That last track only features the words “Life / Isn’t death everything” sung quietly over an achingly sweet melody. While US audiences didn’t know what to make of it, our smarter UK cousins rightly appreciated it, vaunting it to #4. Perhaps it’s only fitting that the best song on an Elton John album without Bernie Taupin is an instrumental. I’d be leery of the albums after, but A Single Man successfully channels Elton’s star power for one more magical ride.

All selections written by Elton John & Gary Osborne unless noted.