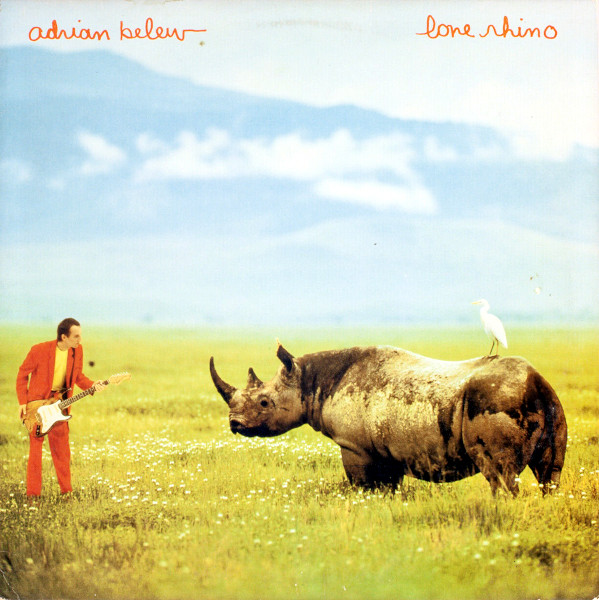 Kronomyth 1.0: Out standing in his field.

Adrian Belew’s reputation as one of alternative music’s leading guitarists was built on albums by David Bowie, Frank Zappa, Talking Heads and, most recently, as the guitarist/vocalist for the re-kconstituted King Crimson. His signature guitar sound included a sort of animal squall that became the centerpiece for songs like Tom Tom Club’s “L’elephant” and Crimson’s “Elephant Talk.” That sound is stamped all over his debut as a solo artist, Lone Rhino.

Although Belew’s exotic guitar work and half-spoken vocals lend the music a certain artistic high-mindedness, at the heart of the artist is an affection for simple melodies, producing a kind of warped pop effect for much of the album. “The Momur,” “Adidas in Heat,” “Swingline” and “Stop It” are catchy at their core, skewing familiar rock & roll and swing motifs to suit Belew’s particular talents. In fact, Belew’s style is a unique amalgam of past influences, borrowing bits of Bowie (the digital buzzing of “African Night Flight”), Tom Tom Club’s layered percussion, and Robert Fripp’s alternately frenetic/transcendental arrangements to flesh out his ideas.

As an arranger, Belew proves to have a knack for smooth and swift movement, handling the drums himself while fretless bass player J. Clifton Mayhugh and pianist Christy Bley support the shifts from airy instrumental segues to well-grounded rock structures. Lyrically, Belew can be smartalecky (“Adidas in Heat”) or surprisingly sentimental (“The Man in the Moon”), delivering the words in a competent manner despite a somewhat limited voice.

Although the record didn’t generate a genuine hit single (“Big Electric Cat” comes closest to qualifying), there are a number of songs that remain among Belew’s best, including the title track and the over-caffeinated “The Momur.” Because Lone Rhino bears a close resemblance to the “new” King Crimson’s most accessible music, it adds little to that band’s body of work other than to show that Belew may have been the most commercially minded of the four. The likely beneficiary of stockpiled songs, Lone Rhino remains the best introduction to Belew’s catalog, and should appeal to art pop fans and adventurous guitar aficionados.

All songs written by Adrian Belew unless noted.