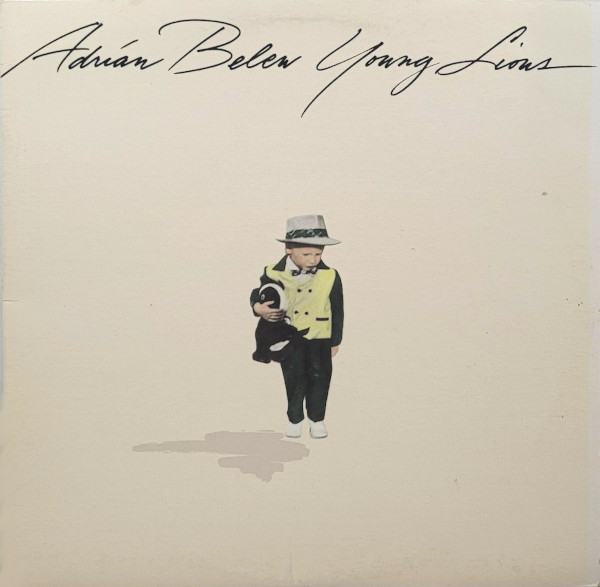 Even with a couple of cameos from The Thin White Duke himself, Belew couldn’t get arrested. Great album, though.

Ever since Lone Rhino emerged from the rock & roll jungle, Adrian Belew has consistently released some of the smartest DIY pop/rock albums on the planet and peppered them with an amazing bestiary of electric guitar sounds. Which has so far earned him, lemme see, zero gold albums and no Top 40 hits. Even a duet with David Bowie, Pretty Pink Rose, didn’t give Belew the sort of visibility it should have. Enter, then, Young Lions, the youngest in a brood of remarkable albums that have consistently flown under the radar and into the hearts of right-brained popophiles.

Truth be told, Young Lions was my least-favorite Adrian Belew pop album for a while. (I write “pop album” to distinguish it from Desire Caught By the Tail, Belew’s surprisingly boring instrumental album.) Maybe I was jaded after two fun albums by The Bears. Today, I would tell you that Young Lions is right in line with Belew’s other albums from the period (Mr. Music Head, Inner Revolution). The two collaborations with David Bowie, unfortunately, generally fall into the Tin Machine camp. (Belew was currently supporting David Bowie’s Sound + Vision tour.) “Pretty Pink Rose” employs the cut-up William Burroughs approach to lyrics, which leads to such deceptively deep gibberish as “She’s the anarchist crucible flying in the face of the despot cannibal.” Gunman makes a little more sense, but the DIY production doesn’t do it justice.

As with all Adrian Belew albums, there are some very sweet and sentimental/environmental pop songs on here, including Young Lions (a song I didn’t appreciate at first), Men in Helicopters and Looking for a U.F.O. (ELO meets Motown). Also included is a lame version of King Crimson’s Heartbeat that was probably added for the publishing rights and an excellent cover of The Traveling Wilburys’ Not Alone, which was probably added because Belew is secretly the president of the Jeff Lynne Fan Club.

One of the things I love about Adrian Belew albums is their humanity. Despite playing with some of the world’s biggest stars, Belew puts at least one self-deprecating or vulnerable song on every album. Here, it’s Phone Call from the Moon, in which Belew calls home from the road and apologizes for missing a child’s birthday party. Maybe someday they’ll credit Belew with inventing one-pant-leg-at-a-time pop music.