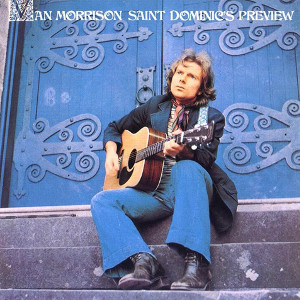 Kronomyth 6.0: WITH SILENT TONGUE AND AWESTRUCK SOUL. On rainy days, this is my umbrella. Saint Dominic’s Preview is a shelter from the crude thunder of modernity. Like all of Van’s classic works, it opens with a joyful embrace, “Jackie Wilson Said,” three minutes of Heaven if ever there was on this giant elemental orb. What follows are strolls through the gardens of ancient God (“Redwood Tree,” “Gypsy”), musical meditations (“Listen To The Lion,” “Almost Independence Day”) and Van as human camera (“Saint Dominic’s Preview”). Morrison’s music again seems effortless, flowing from a natural place like a clear spring of pure inspiration. There’s a feeling of, not just empathy, but community in the music, as though every musician and backing singer were tuned into the same frequency. That’s been part of Morrison’s enigma since Astral Weeks, this unspoken language carried in sound that seems part muse, part spirit. While SDP follows a similar road as Tupelo Honey, it forks at the 11-minute “Listen To The Lion,” a perfect embodiment of Morrison’s soulful, mystical approach to music. An earlier version of this song dates back to the Moondance sessions, but its appearance here several years later is providential, as Morrison was more comfortable in his genius at this stage. I’ve often found myself comparing Van Morrison to Bob Dylan, although the differences here are more striking than the similarities. Dylan’s lyrics were delivered at boiling point, while Morrison lets his ideas simmer on “Listen To The Lion” and “Almost Independence Day” through the use of repetitive phrases. This effect creates an air of solemnity, almost prayer-like, as Morrison’s voice re-examines the words from multiple angles. In a sense, the best Van Morrison albums are like a walk in the woods; natural beauty floods the senses as we stroll and, suddenly, we’re arrested by some sunlit scene, silent and awestruck.

The Pictures
Photography by Michael Maggid.