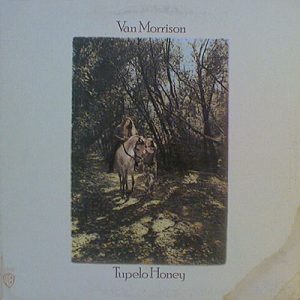 Kronomyth 5.0: O, HOW SHALL SUMMER’S HONEY BREATH HOLD OUT? The classic Van Morrison albums, of which this is one, are special. You don’t simply listen to them, you reunite with them. They begin with a joyful embrace (in this case, the freewheeling “Wild Night”) and what follows is a deep and familiar conversation about love, childhood, nature, the mystic and the majestic. Tupelo Honey has a more countrified feel than most Van Morrison albums, a point that has occasioned me to compare it to Dylan’s Nashville Skyline, although that comparison sells both artists short. You’ll find a quiet strength to songs like “Tupelo Honey” and “Lay Lady Lay” that is at once chivalrous and luminously warm, tart touches of steel guitar and arrangements that wrap around the music like a pair of old blue jeans. I’ve always seen this album as an open love letter to Janet Planet, who is featured prominently on the album (both visually and musically through frequent backing vocals). “I Wanna Roo You” and “When The Evening Sun Goes Down” are pretty gestures, but it’s the powerful “You’re My Woman” that stands as the album’s grand romantic play. Maybe it’s all a gilded fairytale, but who am I to turn a well-played prince and princess out of doors? The album also includes as succinct an explanation of Morrison’s muse as you’ll find anywhere, “(Straight To Your Heart) Like A Cannonball,” the affecting “Old Old Woodstock” (one of my favorite tracks on here) and “Moonshine Whiskey,” one of those songs (like “Madame George”) that Morrison seems to personally inhabit with his whole being. I admit that Tupelo Honey didn’t immediately floor me, but it’s stood the test of time, and what is art if not a kick in the crotch to cruel time?