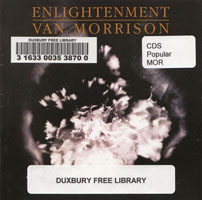 Kronomyth 23.0: REAL REAL GOOD. The continuing musical pilgrimage of Van Morrison has provided a surprisingly smooth ride for such a mercurial character. You expect the caraVan to grow weary, falter, linger too long by pools of rest, yet the energy and conviction are faithfully renewed on every album. Enlightenment is one of his stronger efforts in the middle-period canon, led by the wonderful “Real Real Gone,” a song written 10 years earlier that connects back to the original wellspring of joy from whence “Domino” and all the other black-and-white beauties came. The remainder of the record is thoughtful, careful, spiritual. The Morrison of Enlightenment has found Jesus (“Youth of 1,000 Summers,” “See Me Through”) and even inner peace (“So Quiet In Here”) but is still searching for complete enlightenment. It’s a journey, of course, and Van seems to be moving forward. The songs are intertwined with the usual Celtic mythmaking, whether it’s the references to Avalon or the loyalty to youthful idols (James Brown, Jerry Lee Lewis), and in Morrison it might be said that man’s dual nature of earth-bound and Heavenbound resound most clearly. But that’s such a heavy thought for an early morning, isn’t it? (and the baby is fussing and the dawn is fleeting and the old man in the chair must mind his mousewheel and make money not words). Enlightenment has its prickly moments, none pricklier than a duet with Irish poet Paul Durcan, whose reading on “In The Days Before Rock ‘N’ Roll” offers a window into what Laurie Anderson would sound like if reincarnated as an old Irishman. It could have been much pricklier, though; a point underscored by the alternative takes of “Enlightenment” and “So Quiet In Here.” Enlightenment will renew the faithful and remind us that some things, like our relationship with God and certain expensive and unpronounceable cheeses, grow better with age.

All songs written by Van Morrison unless noted.

The Pictures
Photography by The Douglas Brothers. Design by Bill Smith Studio.