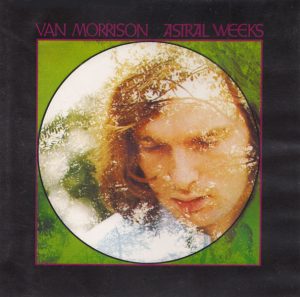 Kronomyth 2.0: THE VAN YOU LOVE TO LOVE. After the success of “Brown-Eyed Girl,” Van ditched that horse and strolled off the beaten path for the poetic, powerful Astral Weeks. It was the first of many unpredictable moves and cultivated the image of Morrison as a jazz spiritualist. From the beginning, it was an unconventional venture: Morrison and his guitar locked away in their ivory tower while a group of hired jazz minstrels followed behind him in due deference, nibbling at the notes he dropped. It’s the magnetism of Morrison that holds it all together on the first side, subtitled “In The Beginning.” Honestly, the backing band adds little that the singer himself doesn’t achieve with acoustic guitar in hand; some strings ebb and flow, an acoustic bass comes loping in on occasion, but mostly you’re held mesmerized by that voice and the words behind it. I haven’t met a Van Morrison album that’s more poetic than Astral Weeks, and it’s here that the Bob Dylan comparisons come easy. Of the four tracks, the opening “Astral Weeks” and the enchanted “Sweet Thing” stand out. On the second side, subtitled “Afterwards,” Morrison and the band work better as a unit for some reason, especially on the overtly jazzy “The Way Young Lovers Do.” The highlight, however, is a nine-minute version of “Madame George” where the sounds and visions move like a slow parade of ghosts and Morrison drops such hidden mysteries as “the love that loves to love.” On first sitting, Astral Weeks is an underwhelming album that seems like so much standing in place. On subsequent sittings, however, it becomes a big pointillist painting with a larger-than-life man in the middle. That enigmatic ending, Van shaking his guitar to wring out the last drop of color from it, suggests an artist who’s emptied everything he has for his art. But with Moondance came replenishment, and again, and the story ever since has been of a man replenished by that magic trilogy of God, Nature and Music.