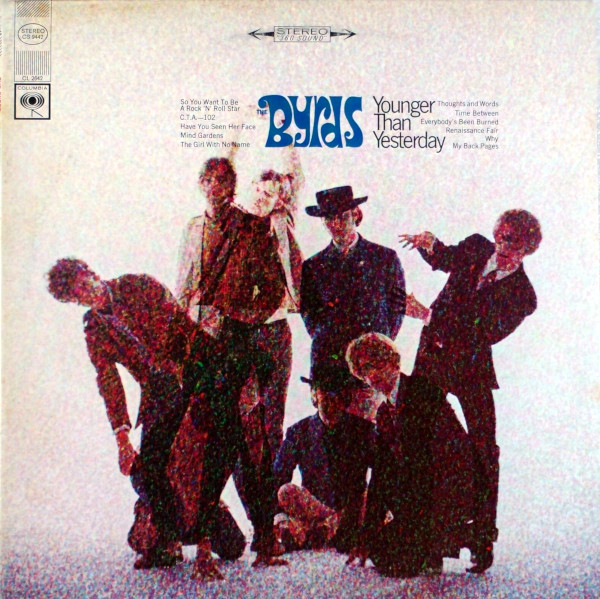 Chris Hillman emerges as a songwriter and the country-rock sounds of the future make their first appearance.

Country rock and Chris Hillman both “arrive” on Younger Than Yesterday. Produced by Gary Usher (fresh from Gene Clark’s first album), the band’s fourth album features an array of psychedelic effects including reversed tapes and electronic sounds that place it at the cutting edge of the post-Revolver landscape.

Hillman makes a strong and immediate impression on Younger Than Yesterday with “So You Want To Be A Rock ‘N’ Roll Star (cowritten with Jim McGuinn) and the minor key harmonies of “Have You Seen Her Face” (influenced by Paul McCartney’s “I’ve Just Seen A Face” perhaps). The influence of The Beatles reappears on Hillman’s “Thoughts And Words.” The erstwhile silent partner in The Byrds also contributes two country rock songs that would foreshadow the band’s future direction, “The Girl With No Name” and “Time Between.” (Appearances by Vern Gosdin and Clarence White suggest that The Byrds were still connected to Gene Clark in spirit.)

“…That was my album in that sense that I started to come out of my shyness and contribute more.” – Chris Hillman, recalling Younger Than Yesterday in an interview with Richie Unterberger.

Younger Than Yesterday also marked a return to Bob Dylan’s rich body of work (“My Back Pages”) and the inclusion of some very good—and, in the case of “Mind Gardens,” very strange—songs from David Crosby. “Everybody’s Been Burned” is one of the best things Crosby has ever done, and “Why” (one of two tracks cowritten with McGuinn) is arguably the catchiest song on the album. Critics seem to have a higher opinion of this album that their last, Fifth Dimension, although I don’t see one as inferior to the other, just different. Fifth Dimension still showed the traces of folk music, while Yesterday looks forward to country rock. Both have strong psychedelic undertones and while Fifth Dimension reached higher highs, Yesterday is more consistently excellent.