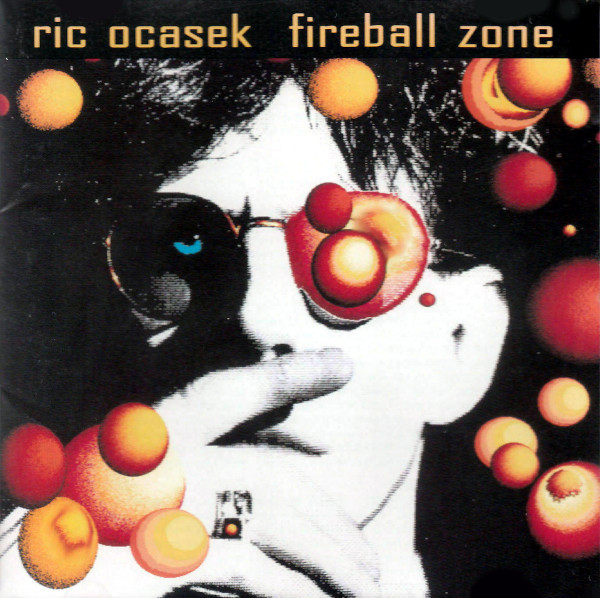 Maybe the rock idol had been idle too long, but Fireball Zone felt more like a safety zone.

Fireball Zone is a slicker record than his last, produced by Nile Rodgers (David Bowie, Duran Duran) and featuring a crack outfit of hired musicians. It didn’t generate a hit single like “Emotion In Motion” – in fact, the album didn’t even chart – but if you’ve followed Ocasek this far, there’s no reason to stop now. The knock on these solo albums is that they add nothing to the man’s legacy. It’s pretty much been downhill since Shake It Up, and Ocasek has never found a supporting band that clicked like The Cars.

It’s tempting to compare Ocasek to artists like David Bowie and Bryan Ferry, but his solo albums simply don’t support the comparison. I’m more often reminded of Marc Bolan, who was similarly guilty of mixing catchy yet uncomfortably familiar melodies with weird, deceptively deep lyrics. Both Bolan and Ocasek seized upon a style that crystallized into rock perfection for a few years, then shifted from celebrity to careerist as their style fell out of fashion (although Bolan’s career was cut too short). Fireball Zone is the kind of album that rock stars make when they don’t want to retire: it’s a creative outlet for a talented artist, but it’s not an artistic statement.

Ocasek albums have become predictable over the years. They contain at least one really good ballad (this time, it’s “The Way You Look Tonight”), a raver or two (“Rockaway”), robotic synth songs (“Fireball Zone”), Cars knockoffs (“Come Back”), etc. Fireball Zone is warmer than Beatitude and most similar to This Side of Paradise, although nothing on here gets under my skin like “Emotion In Motion” or “Mystery.” The greatest sin of Fireball Zone, however, is that it’s out of synch with the times. Even with Rodgers, the uber-stylish Ric Ocasek was no longer chic. A social firestorm was raging around grunge/punk, and while Ocasek may have been a hero to Kurt Cobain, Eddie Vedder and Billy Corgan, he wasn’t to a new generation that was rallying around the music of Nirvana, Pearl Jam and Smashing Pumpkins. Now well into his mid-forties, the former Cars frontman was behind the times, making outmoded music for aging new wavers. It was a safe bet to please his longtime fans, when a dangerous gambit would have been the better move.

A1. Rockaway
A2. Touch Down Easy (Ric Ocasek/Rick Nowles)
A3. Come Back
A4. The Way You Look Tonight
A5. All We Need Is Love
A6. Over And Over
B1. Flowers of Evil
B2. They Tried
B3. Keep That Dream
B4. Balance
B5. Mister Meaner
B6. Fireball Zone