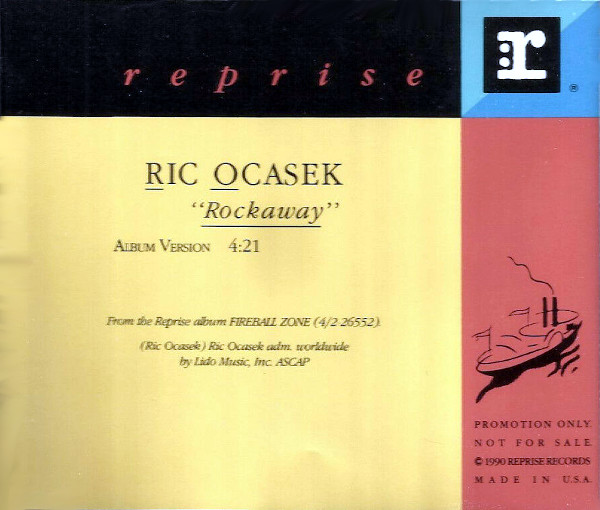 This is the ready-made rocker from Fireball Zone (insert zany music video here).

My compulsion to catalog records is a quirk, not a desire to share my opinion. I have developed some systems along the way that make it easier for me to track down and present information, and have likewise acquired a passing knowledge of music, but I fully believe that any objective assessment of art is inherently flawed because the inner eye is incapable of being objective and, in fact, would defeat the whole purpose of perspective if it were objective. Not that I’m calling “Rockaway” a work of art; maybe “pop art.”

Rockaway was chosen as the advance single from Fireball Zone, Ric’s third solo effort. That meant it warranted a clever music video chocked full of stop-motion images, surreal snapshots, kitsch references and European models. The video and the dutiful efforts of radio stations helped the single make inroads as a Modern Rock Track (a category I’ve never understood), but any song on Fireball Zone would have achieved the same results, more or less. In fact, “Rockaway” is the very picture of product: grab a familiar melody from the shelf, add some stream-of-consciousness lyrics and mix.

As I’ve mentioned before, Ocasek’s approach to songwriting reminds me a lot of Marc Bolan. Listening to a song like “Rockaway,” I’m reminded of what Bolan might have sounded like in the ‘90s. You might think the comparison strange given that T. Rex and The Cars were a decade apart, but Bolan and Ocasek were from the same generation (in fact, Bolan was three years younger than Ocasek). And so, the music of Ric Ocasek is a kind of gift from the musical gods, a what-might-have-been that was. “Rejoice, rejoice,” said a voice in the voice in the breeze, “for the ox on the rocks is the fox in the trees.”