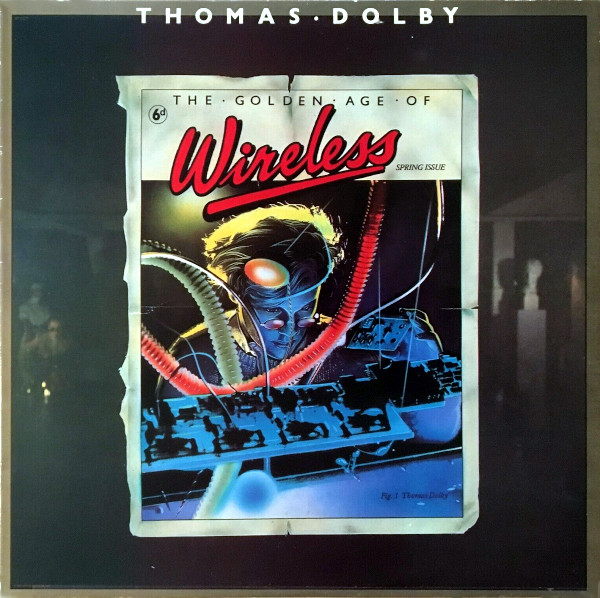 An early steampunk classic long before the idea had gained steam in the mainstream.

Kronomyth 1.0: All wave computers and no playing makes Thomas a dolby.

Thomas Dolby’s first record was light years ahead of most synthesizer pop artists. Even before Human League and Duran Duran became household names, Dolby was building a reputation as a golden boy--an electronic wunderkind for artists as diverse as Joan Armatrading, Foreigner and Lene Lovich. The Golden Age of Wireless was recorded at around the same time as that session work and featured members of Lovich’s band (including the singer herself), but received a somewhat muted release on the little-known Venice In Peril label. An international hit single, “She Blinded Me With Science,” changed Dolby’s fortunes, and the first album was remixed and resequenced to now feature the new hit single and the atmospheric “One of Our Submarines.” It was this version of the album that fell into my hands as a teenager, and I was immediately struck by its intelligence and romantic sense of adventure.

Listening to this record today, the technical sophistication behind it is still amazing. Vienna by Ultravox had made a similar impression on me some years earlier. Both spoke to a bygone age in the future tongues of machines; both reverent of the past and yet revolutionary. Dolby wasn’t a particularly good singer; in fact, the label may not have applied to him at all. But the computers, synthesizers, drum machines and supporting voices told a rich story of a retro-future long before steampunk had gained steam. Dolby was giving us a glimpse into our own future; a future which, ironically, would be absent of Dolby the musician.

A review of side one, point two

I thought I read somewhere that Dolby wrote the music for She Blinded Me With Science after he storyboarded the video. Maybe I’m not remembering that right, since the music hardly feels like an afterthought. Or maybe I’m thinking of “Cloudburst at Shingle Street,” since that song does sound like it was just thrown together. It occurs to me now that “She Blinded Me With Science” shares more than a little in common with “Yassassin” by David Bowie. Then again, I had “Yassassin” etched in my high school ring, so it could be a case of Bowie on the barainrain.

That’s not to say that Golden Age of Wireless isn’t original. Quite the contrary, really. Radio Silence is exactly the sort of thing that influenced Peter John-Vettese and Ian Anderson on Under Wraps. For years, I tried to figure out why Jethro Tull made an album like that. Now I know: they thought it was the future of music, just like I did. We were, unfortunately, both wrong. Speaking of influences, Airwaves had an audible influence on XTC’s Mummer. When bands like Tull and XTC pay you the flattery of imitation, you know you’ve done something right. Flying North, the opening cut on the original elpee version, is like a movie scored. Weightless feels like one of Andy Partridge’s frothier confections. Pretty much a perfect side of plastic from beginning to end.

A review of side two, point two

Europa and The Pirate Twins is a story set to music; it reminds me of some of the storytelling that Kate Bush did on her albums, yet also reminds me of Ultravox in its romanticism. Windpower would have felt right at home on Mummer or The Big Express. Commercial Breakup is an irrepressibly catchy number with a surprising sense of funk. One of Our Submarines is one of the best tracks on here, mixing cinematic scope with remarkable technical achievement and a beautiful melody to boot. Cloudburst at Shingle Street, like I said, sort of falls apart, but they can’t all be gems I suppose.

Based on this album, I would have bet that Dolby was a major musical talent destined for great things, a bet I would have lost. The Flat Earth lived down to its name, and I lost interest soon after. In retrospect, Dolby was probably too smart for his own good, choosing the lure of a start-up over the starmaker machinery. What remains here is one of those wonderfully perfect ‘80s enigmas, like Scritti Politti’s Cupid & Psyche ’85 and Haircut One Hundred’s Pelican West. I would definitely add The Golden Age of Wireless to a list of 1,001 albums that everyone should hear before they die, although I would call it 1,001 albums that everyone should hear before they kill themselves because that has more of a sense of uh-uh-uh-urgency to it.

A1. Flying North
A2. Commercial Breakup (Thomas Dolby/Tim Kerr)
A3. Weightless
A4. Europa and The Pirate Twins
A5. Windpower
B1. The Wreck of the Fairchild
B2. Airwaves
B3. Radio Silence
B4. Cloudburst at Shingle Street

Second UK elpee version (VIP-1076071)
A1. She Blinded Me With Science (Thomas Dolby/Jo Kerr)
A2. Radio Silence
A3. Airwaves
A4. Flying North
A5. Weightless
B1. Europa and The Pirate Twins
B2. Windpower
B3. Commercial Breakup (Thomas Dolby/Tim Kerr)
B4. One of Our Submarines
B5. Cloudburst at Shingle St.