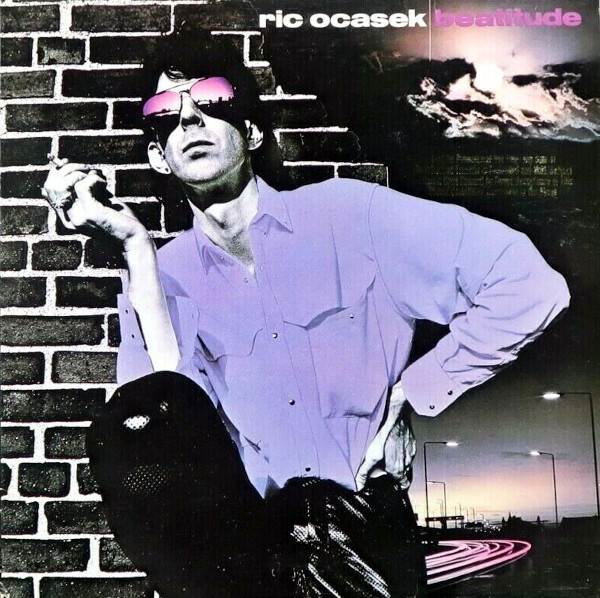 Robotic synth-rock that lacks the contagious energy of The Cars, Ocasek is still cool on Beatitude but a little cold to the touch.

The cold, Kraftwerkian album that Ric Ocasek (maybe) always wanted to make. As downbeat as Shake It Up was upbeat, Beatitude has confounded those who expected another bouncy ride with The Cars. It’s a strange, gloomy, paranoid record much of the time, as if all of Ocasek’s dark energy stored up since Candy-O was allowed to seep back out and be illuminated in blacklight. Like Kraftwerk, the instrument of choice here is synthesizer, and Ocasek doesn’t sing so much as talk/sing, which makes for mechanical pop music: “Connect Up To Me,” “Take A Walk.” The Cars came at you like a rush of adrenalin, Ocasek at his best on Beatitude ambles toward you like an off-kilter robot.

The big hit here is “Something To Grab For,” The Cars in low gear, which would also describe “I Can’t Wait.” Then there’s Ocasek’s tale of good kids gone bad, “Jimmy Jimmy,” a nod to the white god Bowie (“Prove”), the super cool “A Quick One,” a typical Hawkes/Ocasek hybrid in “Out of Control” and the alienated ending of “Time Bomb.” The more I listen to Beatitude, the more I like it, but it’s still a slight disappointment for me, given how great The Cars’ music was. Nothing on here reaches the sublime heights of “Since You’re Gone,” the great melodies seem in shorter supply, and Elliot Easton’s guitar never arrives to save the day. What you’re left with is a good album, lukewarm and antiseptic, that suggests Ocasek was more krautrocker than rock & roller.