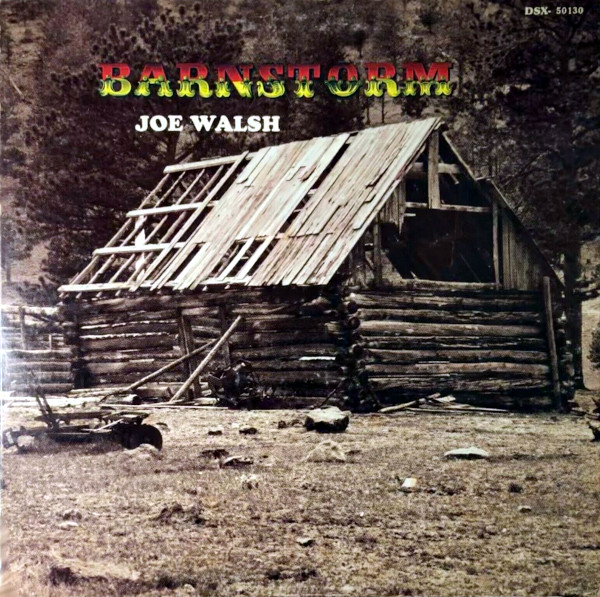 Walsh’s first solo album picks up where the more thoughtful and ambitious songs of James Gang left off.

I’m not sure what I expected a Joe Walsh solo album to sound like, but I didn’t expect it to sound like this. Maybe I should have paid more attention to the wide range of those Walsh compositions on the James Gang’s albums. The closest parallels I have for Barnstorm beyond his previous band are Todd Rundgren and Dave Mason, although it’s more a case of Walsh occasionally intersecting with them. The segue of One and One into a proggy instrumental (Giant Bohemoth), for example, is the kind of move you would expect from Rundgren, while the accomplished mix of acoustic and electric guitars over slightly ponderous arrangements reminds me of Dave Mason (with the caveat that Walsh is clearly the better songwriter and gunslinger).

Despite a reputation as something of a comedian, Barnstorm is a serious record. It’s expertly played (mostly by Walsh) but has a slightly bitter taste, perhaps due to the occasionally gloomy lyrics and Walsh’s nasal vocal delivery. One of the elements I didn’t expect on Barnstorm was the synthesizer. Though used sparingly, the ARP synthesizer immediately evokes Pete Townshend and The Who. Walsh isn’t as introspective and self-critical as Townshend, yet the pair aren’t as far apart as you might think. At the close of “Giant Bohemoth,” for example, I was fairly convinced that Walsh could pull off his own ambient electronic album.

If there isn’t a bad song on Barnstorm (and there isn’t), there isn’t a hit single on here either. Turn To Stone received some radio play if I remember correctly (and I rarely do), and is the closest thing to a “Funk #49” and “Walk Away” followup, while the sentimental I’ll Tell The World About You was released as a single by the apparently sacless label jockies. The early Seventies were the golden age of album rock, when artists tried to channel their artistry into ten (or eight, or six) different ideas that could stand on their own. Mother Says and Home are very good ideas, the spectral Midnight Visitor too.

While Barnstorm didn’t exactly set the rock world on fire upon its release, it has gained something of a cult following over the years, even warranting a Mobile Fidelity release. Bill Szymczyk delivers top-notch production, and multitracking makes this sound more like a quintet than a trio most of the time, so I’d probably spring for a remastered copy if you can find it. I was really impressed by Walsh’s range as a writer and player on this record. I would have questioned the commercial viability of a Joe Walsh solo career (and, in fact, it was still unclear whether his career would be commercially viable at this stage); that is, until I heard Barnstorm. In a lot of ways, this is an even more confident step forward than Mason’s Alone Together or Rundgren’s Runt.

8-track cassette version
A1. Here We Go
A2. Midnight Visitor
A3. One And One
B1. Giant Bohemoth
B2. Turn To Stone
C1. Mother Says
C2. Home
D1. Birdcall Morning
D2. I’ll Tell The World About You
D3. Comin’ Down