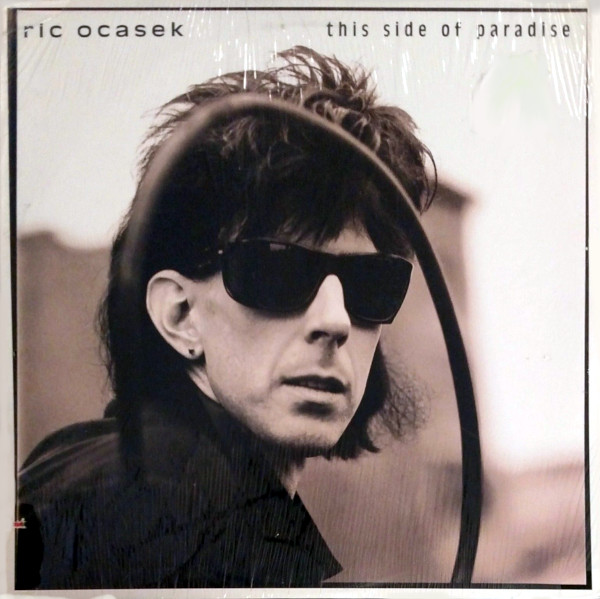 A more polished followup to Beatitude, featuring most of The Cars and a bonafide hit in “Emotion In Motion.”

You might think I’m crazy, but Ric’s records tend to grow on me over time. I don’t think any of them approach the quality of vintage Cars. I don’t even think they’re particularly original. But his soothing, downbeat voice and ear for bouncy melodies arrive like a welcome friend, and soon I find myself getting lost in an “Emotion In Motion” or “Mystery.”

This Side of Paradise, released during a gap in what would be The Cars’ last gasp, is a more polished affair than his first. Co-produced by Chris Hughes (Tears For Fears), the album features state-of-the-art synthesizers and a perfectionist’s touch that suggests Bryan Ferry in a colder, minimalist mood. (Ocasek looked like Iggy Pop and Bryan Ferry had a baby together.) The full-time participation of Greg Hawkes is definitely an upgrade; he was always the perfect foil to Ocasek’s staid songwriting. Guitarist Steve Stevens (from Billy Idol’s band) provides the requisite hysterical (and heavily edited) 80s guitar solos.

Given the participation of the other Cars members, it’s tempting to hear This Side of Paradise as the next Cars album. In fact, on “True To You,” I dare you to resist that temptation. But Ocasek’s musical vision is more synthetic, moody, stripped-down and then built back up again in the final mix. For someone who loved “You Wear Those Eyes,” you might say it’s the best side of Ocasek’s muse. The truth is that his solo albums so far could use a little shaking up: a raver or two that you’d want to play in the car with the windows rolled down.

“I guess I’m a little more naked on a solo record. And sometimes I do think I slant my solo albums so that they have a few songs that The Cars really couldn’t do. Weirder songs. More poetic.” – Ric Ocasek, from a 1986 interview with the Chicago Tribune.

Considering what a sellout their last record was (Heartbeat City), you may find it easier to buy in to the idea of a Ric Ocasek solo album this time around. Chris Hughes is hardly a hands-off producer, but compared to Mutt Lange he’s a model of restraint. Ocasek, understated almost to a fault, effectually co-stars with the machines, and the result is pretty impressive on “Keep On Laughin’,” “This Side of Paradise,” “Hello Darkness” and the rest of the album. Few albums from the mid-eighties have aged so well in terms of technology and style. None of the Ocasek solo albums are compulsory purchases, yet Cars fans understandably had trouble letting go so soon, and this might be the best of the supplemental solo albums this side of the original classic quartet.