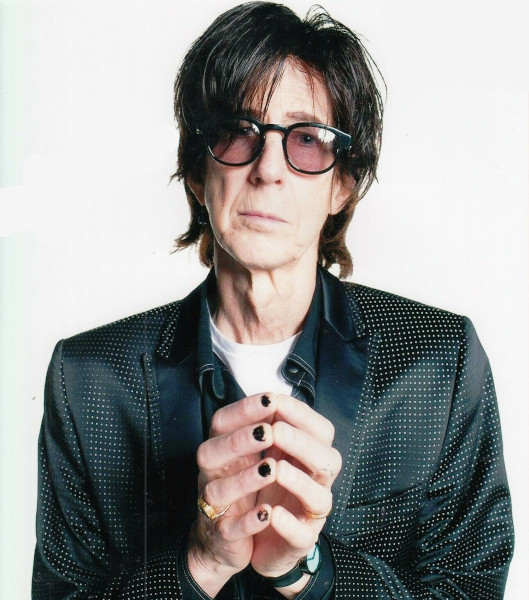 The last of the great glam rockers and a new wave pioneer, Ocasek was the driving force behind The Cars.

Ric Ocasek was the principal creative force behind The Cars. The road to stardom was not a straight line for him; he was in his mid 30s when The Cars released their first album. His solo career after The Cars was equally uneven and, frankly, not up to the caliber of The Cars. It clicked for seven years (1978-1984), then started to fall apart. Yet even after The Cars, Ocasek wore the role of elder rock statesman well, and there was something reassuring about the world while he was in it. Maybe it was his eternal cool; the world aged around us while Ocasek stayed the same, part Dorian Gray, part Dracula.

A contemporary of David Bowie and Marc Bolan, Ocasek was in many ways the last of the great glam rockers. In fact, the death of Bolan (in a car crash) and the arrival of The Cars occur at about the same time. (Tiger! Over there in the trees!) Certainly, the chrome-plated hooks and absurd poetry (“You’ve got your nuclear boots and your drip dry glove”) are glammy through and through. Instead, The Cars were thrust into the emerging category of new wave alongside The Police, Elvis Costello, Squeeze and every other quirky artist who didn’t wear safety pins on their clothes, and the label stuck.

After Shake It Up, arguably the best album The Cars ever made, Ocasek took some time off to record his first album, Beatitude. Featuring synth-driven songs, Beatitude lacked the contagious energy of The Cars and generated only one minor hit, “Something To Grab For.” Following the massively successful Heartbeat City, Ocasek dropped a second album, This Side of Paradise, which featured his one and only Top 40 hit, “Emotion In Motion.” (The Cars, by comparison, had thirteen Top 40 singles in the US.) The coolly received Door to Door signaled the end of The Cars, and Ocasek was left with nothing but his royalty checks, supermodel wife and rock & roll adulation, which I’m guessing wasn’t awful.

In 1991, Ocasek returned with a new album, Fireball Zone. In the interim, however, the world had tired of new wave and was awakening to the smell of grunge. Ocasek struggled to stay relevant in a world where everyone was tortured and angry because, you know, he was actually leading a pretty comfortable life by all appearances. Quick Change World didn’t fare any better, and Ocasek again took an extended break. In 1997, Ocasek re-emerged from the shadows with Troublizing, featuring the production and participation of Smashing Pumpkins’ Billy Corgan (an avowed Ocasek fan). Though it didn’t chart, the album brought Ocasek full circle from inspiration to elder statesman. Nexterday, released eight years later, found Ocasek as vampire-chic as ever. Some things never change, and the best things really shouldn’t.

GETCHERTIKTZ (1996)
Quiet Please Performance in Progress / The Big Picture / The History of Glances / Tell Me / Crowds / Taking a Break From Gods and Monsters / Smell War / Quivering / Judith in Disgust / Train / All Men Should Be Boxers / Mechanics of Fluid / Living Crazed / Attempted Suicide / And Jesus Said That Whores Will Be the First to Enter the Kingdom of Heaven / No Way / Livingroom Lamplight Oddysey / Listen Up, Saint Francis / Gangland Scag / Daily Events Book / With Eight Essential Vitamins / Metal Eyes / A Certain Blindness / Ghosts Before Breakfast / Shoot the Fucker / Everyone Fuckt. Co-credited to Alan Vega and released on compact disc in 1996 in the US (Sooj Records, 10042).

TROUBLIZING (1997)
The Next Right Moment / Hang on Tight / Crashland Consequence / Troublizing / Not Shocked / Situation / Fix on You / People We Know / Here We Go / Society Trance / Asia Minor. Released on compact disc and cassette on September 9, 1997 in the US and Canada (Columbia, 67962).