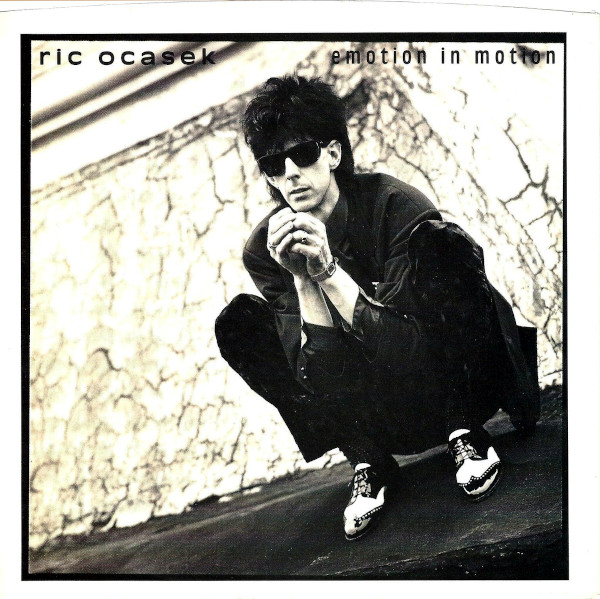 Ric was apparently a one-hit wonder, and this was the hit. I know, I know, tell it to Devo.

You know, if they wanted to put Ric Ocasek in a fairytale, they simply could have shot a documentrary: international rock star dating a top model. Of course, life’s an illusion (love is a dream), so I’m sure he had his challenges – like trying to carry a model that probably weighed as much as he did. But me, I was rooting for the evil dwarf.

“Emotion in Motion” is a really beautiful song that builds up nicely. It was also Ric Ocasek’s only hit single as a solo artist. Kind of hard to believe, I know, but I’m sure those royalty checks from The Cars were some consolation. Note that the single version was about forty seconds shorter than the original. I compared them using a stopwatch (because, you know, master of time et cetera) and found that all they did was shorten the intro and the outro. (“Oh, is that so?” you say.) The flip side is the album version of “P.F.J.” I read in an interview that the song is about people who wear monogrammed shirts because, I guess, they needed to be taken down a notch, since monogrammed shirts are (again, apparently) responsible for so much evil in the world.

And that would be the end of it, except that those sneaky Brits slipped an unreleased track onto the B side of the 12-inch single, “Step By Step.” It’s more or less filler, the sort of thing that may have missed the cut for one of his albums but in line with what you’d expect from a B side. I wouldn’t make hunting it down your life’s work, wrote the man who spent two hours hunting down information on Ric Ocasek’s only Top 20 single and still hasn’t figured out the origins of the extended version.