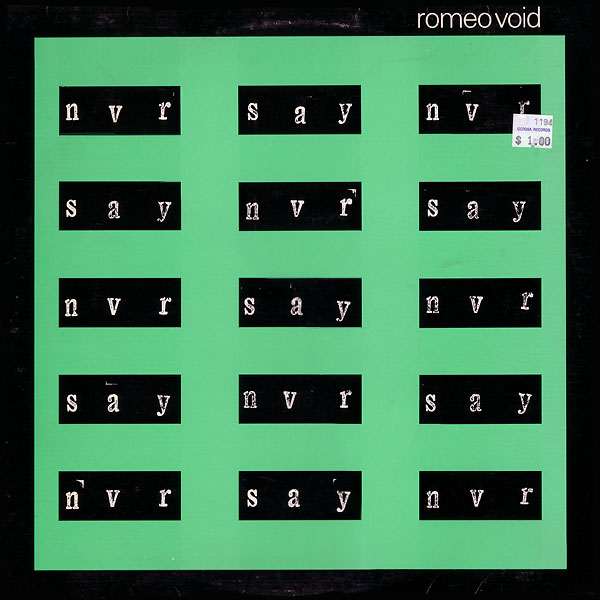 This was the band’s “Lucky Number,” even if that number was only #147 on the US charts.

Kronomyth 1.5: Here’s much to do with hate, but more with love.

Rock lobster. I know what boys like. Marianne Faithfull and Deborah Harry and girls using the “F” word. Whatever was right with the ‘80s could be found right inside of “Never Say Never.” Maybe this happens with every new musical form, but the new wave scene around the turn of the decade produced a slew of strong singles which became calling cards for their authors: Never say never, Only a lad, Turning japanese, et cetera. I know it happened with metal in the ‘80s, alternative rock in the ‘90s, and so passing ships like Warrant and The Cranberries enter the lexicon of popular music by the galley entrance.

Anyway, back to Romeo Void. The opening “Never Say Never” is the best thing about this EP, sounding like a Gang of Four Waitresses and including an unblinking look at a late-blooming Electra that makes Marianne Faithfull look like a froo-froo girlie (ok, not really). The rest of the EP attempts to find a place for Benjamin Bossi’s saxophone and Debora Iyall’s poetry within the context of new wave.

Sometimes it sounds like Echo & The Bunnymen, sometimes like Modern English, but Romeo Void fail to strike upon as startling or fresh a sound as they do on “Never Say Never.” Beyond Roxy Music, the saxophone never found a suitable home in alternative rock; the Furs were smart to lose it early on. However, the real failure of Romeo Void lies in the limited number of female rock bands in the world, and the perplexing coincidence that all the women in those bands were also marketed as sex symbols. You know, if I were a woman, I would have punched a lot more people in the face by now.

All songs written by Romeo Void.