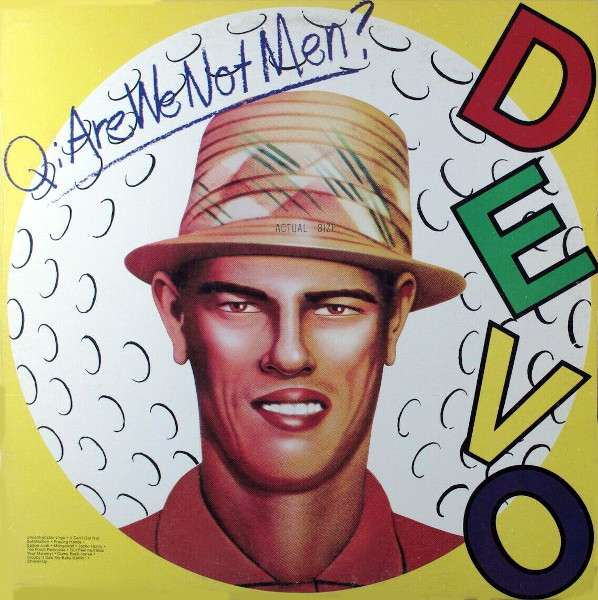 I’ve got a gut feeling these guys are geniuses.

Twenty years after rock & roll helped stir a social revolution, Devo presented us with our own social de-evolution. No less a luminary than David Bowie believed Devo to be the future of music. I was thirteen years old when Q: Are We Not Men? came out, and bought it based solely on the Brian Eno production credit (I was a big Bowie fan from an early age). I still remember listening to it rapturously on the car ride home with my brother and father, neither of whom shared my enthusiasm. Forty years later, this record still gives me goosebumps.

Art is never created in a vacuum, though you could argue that Akron, Ohio was a kind of vacuum, shielded from the local influences that informed the music of Talking Heads and Gang of Four. (Meanwhile, several states away, The B-52s were creating similar music in new Athens.) Devo’s debut album sounded like nothing I had heard before: white aggro funk mixed with elements of punk, pop and post-modernism, presented as a tongue-in-cheek critique of an idealized Amerika. Although Devo unveils their manifesto on “Jocko Homo,” it’s the opening “Uncontrollable Urge” that best sums up the band’s approach, as if all their repressed sexual energy were manifested as music. (Their earliest recordings seem to bear this out.)

The songs of Q: Are We Not Men? represent the cream of the spud crop from the last few years: “Jocko Homo,” “Mongoloid” and their herky-jerky rendition of the Rolling Stones’ “(I Can’t Get No) Satisfaction.” Also included here are such minor classics as “Space Junk,” “Gut Feeling,” “Shrivel-Up” and “Come Back Jonee.” There isn’t a single track on here that doesn’t poke your brain in pleasant places. Despite the tantalizing presence of Eno, it seems a true collaboration wasn’t in the cards, and any influence he had on the final product was minimal; this is Devo’s album from beginning to end. Subsequent albums would re-hash the same ideas even as it all devolved into Kraftwerkian robot music (some of which, such as New Traditionalists, was still quite revolutionary). In 2009, a complete live performance of Q: Are We Not Men? was appended to the original album, underscoring just how ahead of its time Devo has always been. Perhaps it will be up to future generations to decode it all.