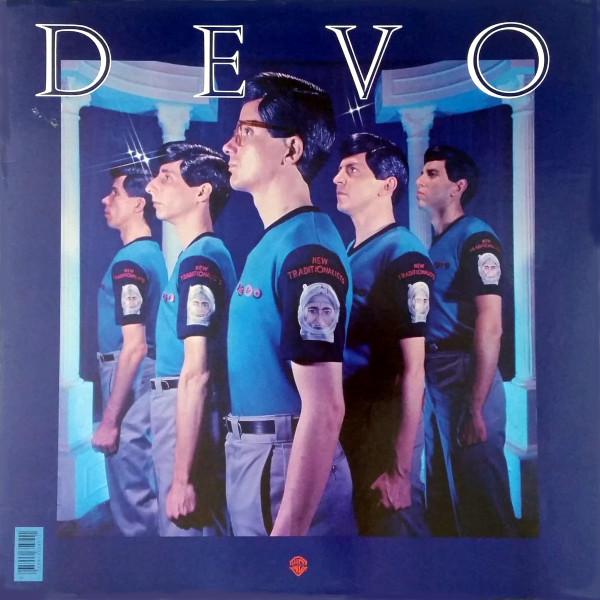 Devo’s most underappreciated album is an electronic slap (your mammy) in the face.

I’ve always felt there should be a way to visualize a discography: a disco-topography, if you will. You’d have the peaks, valleys, band schisms and so on. In that disco-topography, there might be a mountain range of very good albums. For Devo, that range would begin at Q: Are We Not Men? and end at New Traditionalists. The last mountain in the range is just the sort of thing you would expect to have its own word in German, like sturmwachter (a reference that only Tull fans are likely to get).

I seem to be in the critical minority in my appreciation for New Traditionalists, though I don’t mind, having long ceased to be complicit with the world and its ways. What I loved most about the band in the beginning was their aggrosexual stance against society. In that respect, New Traditionalists stands tall; taller than Freedom of Choice, taller than Oh, No! It’s Devo. The opening “Through Being Cool” sets the tone for the entire album. The band seems re-energized, the songs burst with repressed perversion and the synthesizers are no longer a robotic crutch but a metal truncheon. If they ever build a synthesizer hall of fame, this album deserves its own shrine; it’s that good.

Credited to Mark Mothersbaugh and Jerry Casale, the songs rank with some of their best ideas ever: “Jerkin’ Back ‘N’ Forth,” “Going Under,” “Beautiful World,” “Race of Doom.” They’d make my shortlist of Devo’s greatest. And then there’s the band’s inspired reworking of “Working In The Coalmine,” their best cover since “Satisfaction.” The fact that New Traditionalists was so easily dismissed by critics proved that they were never on board with de-evolution to begin with. They didn’t get the fact that this is where de-evolution would logically take us: to a place where machines had eaten the electric guitars and anything that sounded like a real instrument (guitars, drums) was only the veneer of humanity.

Freedom of Choice had the right idea (“Girl U Want,” “Gates of Steel,” “Snowball”) but the wrong production. It sounded too mechanical, and that sold the band’s vision short. Oh, No! It’s Devo suffers from bad execution and ideas. But New Traditionalists is their most perfectly realized vision since Q: Are We Not Men? I hadn’t felt this excited about the de-revolution in years. It didn’t hurt that the entire album was a guilty pleasure, with barbed hooks hiding in every song.

The band’s first fully band-produced album confirms that Devo knew exactly what kind of music they wanted to make. Unfortunately, not enough people wanted the same thing, and Roy Thomas Baker (The Cars, Queen) was brought in for their next album. If you missed this the first time, New Traditionalists sounds just as fresh today as it did nearly forty years ago. The 1997 Infinite Zero remaster sounds great and includes two bonus “songs” plus “Working In A Coalmine,” which was included as a free one-sided single with the original US elpee and tacked onto the cassette versions as the last track.