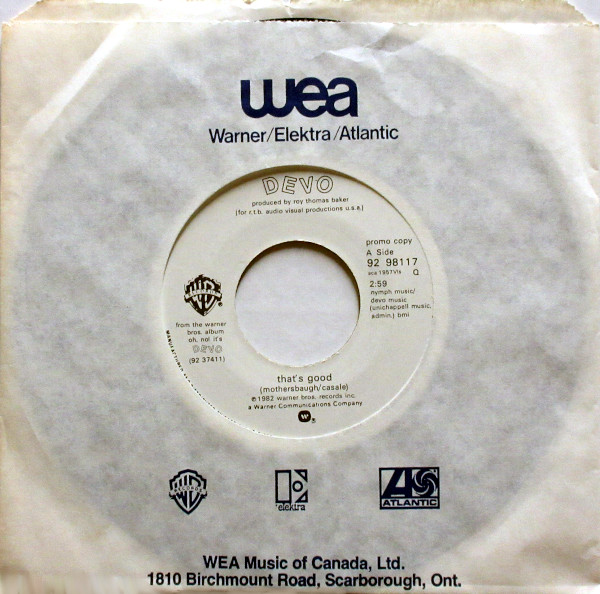 The fickle finger of single selection pointed next to this song from Oh, No! It’s Devo.

Kronomyth 5.2: In the time of oral grave grave legalities of hate.

A pervading sense of powerlessness informs Oh, No! It’s Devo. You hear that on songs like “Speed Racer,” where dangerous stereotypes are already impressed upon children, or What I Must Do, where autonomy is replaced by automatons. Even the music felt powerless, as machines drained the blood and emotion from their muse.

That’s Good, the second single from Devo’s fifth album, tackles the problem of how each society defines and reinforces its own concept of good. At least that’s always been my takeaway. Echoing “Freedom of Choice,” the audience seems to have no power (or preference) over whether it accepts or rejects this definition; learning to do with and without good things are both proposed with equal force. It’s a deep theme (Devo songs often are), deceptively performed with mechanical ennui, but these are life-and-death matters.

The song was edited slightly for the 7-inch single and expanded for the 12-inch single. The 12-inch “extended” version is simply more of the same; no radical remixing takes place. A 12-inch picture disc single (available in two different picture versions) features an extended version of “Speed Racer” (or another lap around the track).