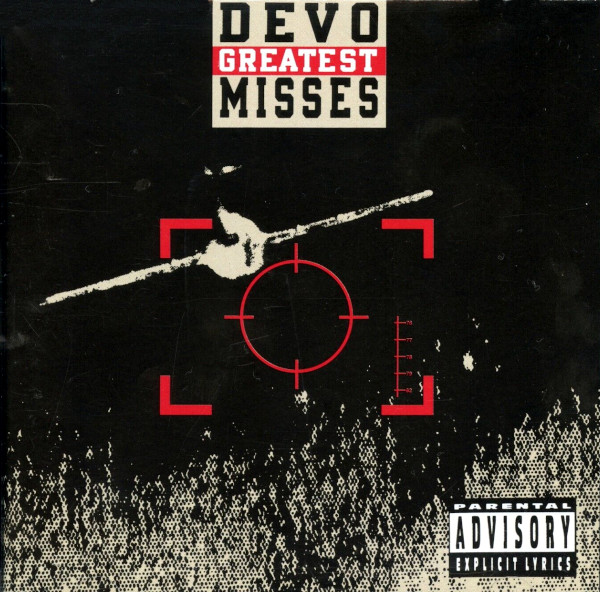 A compilation that confirms what most of us already knew: the first two Devo albums were the best.

Kronomyth 8.3: In case you missed the hole thing.

In case you missed it the first time, this is some of the more revolutionary music to ever insinuate itself onto a piece of grooved plastic. Greatest Misses is the companion compilation to Greatest Hits (yes, that’s right, he wrote “hits” with an “s”), focusing on the groundbreaking, mindbending material that graced their first two elpees. A few tracks appear in their early Booji Boy Versions, including “(I Can’t Get No) Satisfaction” and the wonderful “Be Stiff.” Sometimes, I wish they could leave the past well enough alone, but Devo’s past is still our future, as these tracks make perfectly plain.

Few bands were ever as misunderstood or underappreciated in their own time as Devo. That “Whip It” of all things would define the band remains one of the great cosmic jokes. Anyone who heard their debut album couldn’t mistake the band for anything less than fearless revolutionaries. “Too Much Paranoias,” “Jocko Homo” and “Shrivel-Up” were death-dealing blows to the status quo. How could you give a crap about Hall & Oates after hearing “Clockout” or “Mongoloid?” Of course, the world at large may not want to be reminded that they’re a race of monkey-spanking monkeys by guys wearing flower pots and toilet seats, but I’ve been down with the devolutionary talk from day one.

The only knock I have on the Misses is that it’s redundant for anyone who owns the first two albums (and, really, everyone should). I’d pay ten bucks just to hear “Be Stiff,” and the non-album “Penetration in the Centrefold” is a wild departure, but the real story starts at the beginning and doesn’t get around to the Greatest Anything until the end. Even here at the end, however, you still have to admire the view.