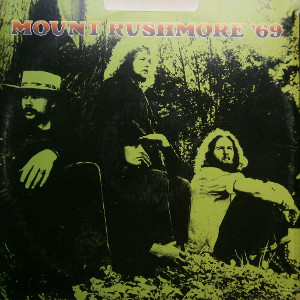 The band’s fortunes (and playing and songwriting) didn’t improve on their second album, although at least they didn’t lose their shirts this time.

Kronomyth 2.0: TAKEN FOR GRANITE. Mount Rushmore’s second, final album doesn’t audibly improve on the formula of the first. It’s psychedelic blues rock played with some measure of competence but not enough personality. Mike Bolan is a decent guitarist, and there are moments when the band flashes some instrumental chops (“Toe Jam,” “Love Is The Reason”), just not enough of those moments to justify forty minutes of your time. Producer Ray Ruff doesn’t do the band any favors; the production is downright listless in spots (“10:09 Blues,” “I’m Comin’ Home”). The group still continues to struggle with writing their own material, digging back to the original lineup’s repertoire for two tracks and taking Mose Allison’s “V-8 Ford Blues” for a spin. The originals from Glen Smith aren’t very (original), constituting standard blues exercises. I will tell you, “10:09 Blues” is a slow train comin’. Cream, Hendrix, The Doors and The Paul Butterfield Blues Band could run rings around Rushmore. Their first record was a little more exciting and had the benefit of choosing from the cream of the band’s live repertoire. Leftovers like “King of Earrings” and “Love Is The Reason” are laughably bad in spots. While it would seem the band’s demise was premature, Mount Rushmore was never destined for great things. There must be a dozen bands from the era that warrant the archaeological interest more than Mount Rushmore. If you’ve dug that deep and still haven’t reached bottom, then feel stone free to take a peak at Rushmore’s twin monuments—unless, that is, you don’t believe in statues.