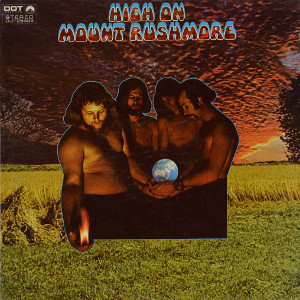 Frank Zappa wasn’t kidding; there really were people who moved to San Francisco, started a band, rented a house on Haight-Ashbury and smoked an awful lot of dope. That formula paid off for Mount Rushmore, who managed to score some high-profile gigs in the area and, soon after, a record contract with Dot Records. Their first album, High On Mount Rushmore, was produced by Ray Ruff (Time Out! Time In For Them) and featured middling psychedelic blues-rock that went largely ignored at the time and has only been resurrected in the wake of a resurgent interest in psychedelic rock. As an artifact of the times, High On Mount Rushmore holds some interest for musical archaeologists. You have the white hippie heist of Jimi Hendrix’ “Stone Free,” which became the band’s only single, a genuine psychedelic epic (“Looking Back”) that represents the height of Mount Rushmore’s achievement here and a few songs that capture the band’s live energy in the studio (“Ocean,” “She’s So Good To Me”). Among the psychedelic rock records made in the Sixties, High on Mount Rushmore wouldn’t be high on my list. Mount Rushmore were in the right place at the right time, and Dot Records was a country music label (not an astute connoisseur of psychedelia) looking to take a flyer on the latest musical trend. I wouldn’t be surprised at all to learn that the label pushed the band to record “Stone Free,” since the band doesn’t seem to have given their arrangement of it much thought. In mounting a defense of the band, they had undergone significant changes in their short history; Glenn Smith and Mike Bolan were recent additions, and they were still playing material from their original lead guitarist, Warren Phillips. In that context, High On Mount Rushmore is better viewed as the demo tape of a band in transition.