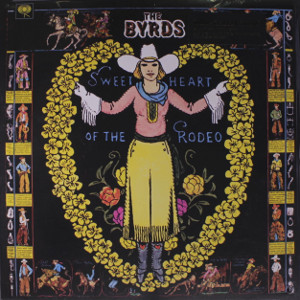 Episode seven, in which Gram Parsons temporarily takes over the Byrds and singlehandedly invents country-rock. Think Bob Dylan’s electric revelation, but in reverse.

Kronomyth 7.0: HOLY COWBOY. Gram Parsons didn’t join The Byrds, he hijacked them. Calling this album a “complete reinvention” or “radical departure from the past” doesn’t capture the shock of hearing Sweetheart of the Rodeo for the first time. By turning their back on their psychedelic past, The Byrds helped to create a new genre of music: country-rock. Of course, there was always the undercurrent of folk/country in the music of The Byrds, but we never knew how deep those waters ran until Rodeo arrived. Chris Hillman’s roots were in folk music and, as a Christian, songs such as “I Am A Pilgrim,” “The Christian Life” and Woody Guthrie’s “Pretty Boy Floyd” were likely already familiar to him. Byrds fans, however, were unprepared for an entire album of country classics complete with pedal steel guitar, fiddle, banjo and mandolin. As for Roger McGuinn, who seems to have abdicated the leadership role (I never saw the band as having a leader to begin with), his versions of Bob Dylan’s “You Ain’t Going Nowhere” and “Nothing Was Delivered” may be the album’s most obvious links to the past. The Dylan parallels are interesting here, as I keep coming back to the shock that listeners felt when Dylan and his band plugged in electric instruments; Sweetheart of the Rodeo is the inverse of that. The Byrds unplug their instruments, disconnect from the drug scene (musically, not personally) and play country music without a trace of irony. It’s the most “normal” album they’ve ever recorded and yet, at the same time, the most daring thing they’ve ever done. In a very real sense, Sweetheart of the Rodeo opened the floodgates for country music to mix with rock and roll (Jefferson Airplane, Grateful Dead and other psychedelic acts would soon follow suit). It’s not hyperbole to say that the New Riders of the Purple Sage, the Eagles and the entire country-rock genre owe a deep debt of gratiitude to the groundbreaking work of Gram Parsons and The Byrds. Hearing Parsons, McGuinn and Hillman play country music with rock sensibilities is a revelation. What awaits are songs of outlaws (“Pretty Boy Floyd,” “Life In Prison”) and natural beauty (“Hickory Wind,” “Blue Canadian Rockies”) sweetened by the pleasure of the pedal steel guitar. But be warned: after hearing Rodeo, you may never go back to rock and roll again.

Original LP Version
A1. You Ain’t Going Nowhere (Bob Dylan)
A2. I Am A Pilgrim (trad. arr. by Roger McGuinn/Chris Hillman)
A3. The Christian Life (Charles Louvin/Ira Louvin)
A4. You Don’t Miss Your Water (William Bell)
A5. You’re Still On My Mind (Luke McDaniel)
A6. Pretty Boy Floyd (Woody Guthrie)
B1. Hickory Wind (Gram Parsons, Bob Buchanan)
B2. One Hundred Years From Now (Gram Parsons)
B3. Blue Canadian Rockies (Cindy Walker)
B4. Life In Prison (Merle Haggard/Jelly Sanders)
B5. Nothing Was Delivered (Bob Dylan)