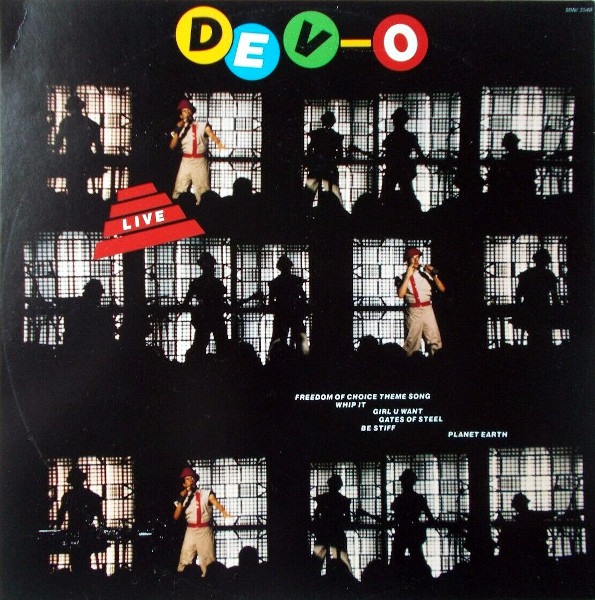 A little something that Warner Bros. whipped up from the Warfield show to make money.

Kronomyth 3.5: When something’s going right, you must EP it.

Warner Brothers capitalized on the success of “Whip It” by releasing a six-song live EP featuring material from (mostly) Freedom of Choice including, of course, Whip It. The live performances are nearly identical to the original studio versions. I had always taken the band’s reference to Alan Myers as “the human metronome” as term of affection, but no, the man literally keeps the exact same beat as the original. DEV-O Live moves like clockwork, which is both and the best and worst thing about it.

I ignored this when it came out because I had zero interest in hearing Devo perform their songs live. Turns out I wasn’t missing anything. Except for maybe fifteen seconds of Be Stiff being very stiff, these songs are just like you remember which, if you bought Freedom of Choice, were probably still fresh in mind. Honestly, you could replicate the experience by listening to Freedom of Choice and creating your own fan noise before and after each song.

The only new wrinkle here is an instrumental version of “Freedom of Choice” dubbed Freedom of Choice Theme Song, which is a kind of foretaste of the band’s E-Z Listening Disc. (Note to self: Do not buy Devo’s E-Z Listening Disc.) Years later, the EP was expanded into a full-length release with the addition of most of the setlist from the original Warfield Theatre performance. That version is likely to deliver a few more surprises, although if you really want to be surprised, I’d check out some of the live archival stuff available like The Mongoloid Years.