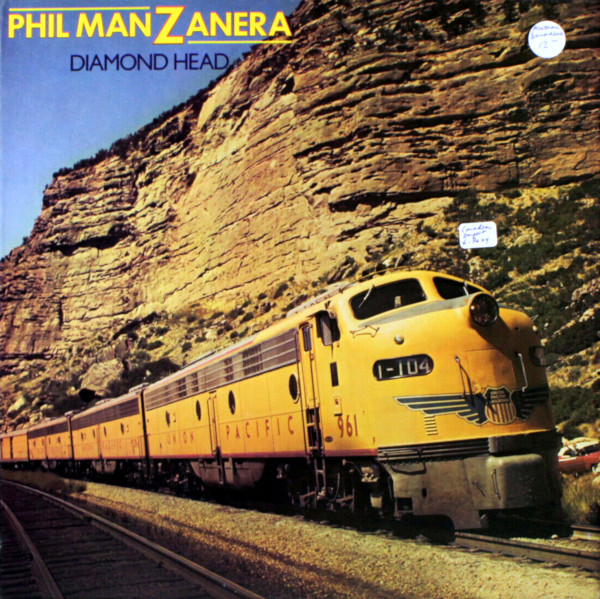 An album that leans closer to the Eno side of his recent adventures, with members of Roxy Music and Quiet Sun.

The bedazzled guitarist from Roxy Music released his first solo album in the early Summer of 75, a full season before Roxy dropped Siren and Eno released Another Green World. While it’s not as enchanting as those records, and nothing on here matches the majesty of an “Out of the Blue” or the sheer kookiness of a “Cindy Tells Me,” Diamond Head doesn’t fall that shy of those marks. About half instrumental and half a songwriting collaborative with outside singers (Eno, John Wetton, Robert Wyatt, Bill MacCormick), it’s a nice supplement to your Roxy/Ferry/Eno collection.

The lineup looks like a cross between Roxy Music and Eno’s last two albums (Here Come The Warm Jets, Taking Tiger Mountain), which should immediately spark interest. The opening Frontera, sung by Robert Wyatt in very credible Spanish, is an unexpected leftist turn right at the onset. There’s a little of Roxy’s glitter in it, but not enough to give the impression that Phil Manzanera plans to follow in anyone’s footsteps but his own. Diamond Head, the first of four instrumentals on the album, might be the record’s crowning achievement. Think of Eno’s more sentimental, sweeping numbers (“On Some Faraway Beach,” “Taking Tiger Mountain”), only better. Big Day is the first of two vocal songs featuring the inimitable Eno, who muses on a misadventure in Peru with predictably droll consequences. The Flex is an instrumental that gives Eddie Jobson and Andy Mackay some room to flex their chops (Jobson on clavinet, no less), a device that Roxy Music employed in its early days (cf. “Re-make/Re-model”). The first side ends as unexpectedly as it began, with a crimson-blushed duet between John Wetton and Doreen Chanter, Same Time Next Week.

Side two starts with Miss Shapiro, which will delight fans of Eno’s first two solo albums. (This track and “Big Day” would have made awesome additions as bonus tracks to Tiger Mountain.) The instrumental East of Echo follows, and Roxy Music fans will detect the rhythm guitar from “Mother of Pearl” in the mix. Lagrima is a duet featuring a Spanish guitar with heavy effects and Andy Mackay’s haunting oboe. Alma sort of ends where things began, with Matching Mole’s Bill MacCormick on vocals.

There are some people who seem to have a real soft spot for this album, and that’s wonderful. I would tell you that there are at least 10 albums from Roxy, Ferry and Eno that you should own first, but if those artists are a cornerstone of your record collection (and they probably should be), you’ll dig Diamond Head too. If it helps from a prog reference, it’s a better record than Steve Howe’s Beginnings, although no match for Steve Hackett’s Voyage of the Acolyte.