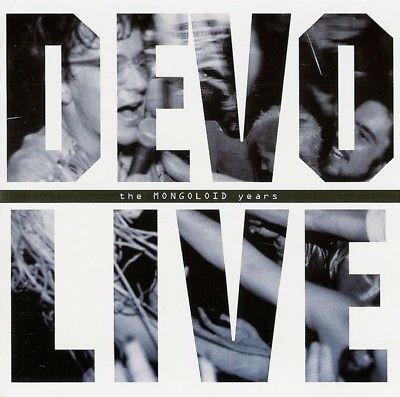 In the nineties, Rykodisc seemed intent on rewriting history by releasing archival material from Devo’s formative years and resetting their launch date to the mid seventies. I don’t disagree with the exercise, since what the band recorded before Q: Are We Not Men? is more interesting than what they recorded after Oh, No! It’s Devo. Fortunately, the band was careful to chronicle their journey, so that a lot of early recordings and videos exist that show their evolution from shock artists to rock artists.

The Hardcore Devo compilations are the best examples of this. The Mongoloid Years, on the other hand, devolves into chaos by digging too deep into the archives, back to a poorly recorded version of their infamous Halloween 1975 that starts with Murray Saul’s unintelligble rant and manages to go downhill from there. I mean, it’s interesting to hear just how annoying Devo really were, but in the back of your head is a gnawing voice asking, “Did I really paid fifteen dollars just to hear other people get screwed out of a Sun Ra concert?”

The Crypt show from 1976 is better, featuring early versions of “Clockout,” “Blockhead,” “Space Junk” and the nonalbum “Soo Bawls.” The real meat of the matter occurs at the onset, with Devo’s pivotal performance at Max’s Kansas City that originally featured an introduction from the thin man himself, David Bowie. These live versions are nearly identical to the versions recorded for their first album, which clearly frustrated the heck out of Brian Eno, but you have to respect the fact that Devo knew exactly how they wanted these songs to sound.

The band had perfected their sound and vision by 1977; no wonder Bowie thought they were the future of music. The Max’s Kansas City concert doesn’t add a single thing to their debut other than debuting it a year earlier. As an historical document, The Mongoloid Years will hold some value for fans. Those same fans, however, would be better served by picking up the Hardcore Devo albums first, then deciding just how big they want to make their Devo shrine.