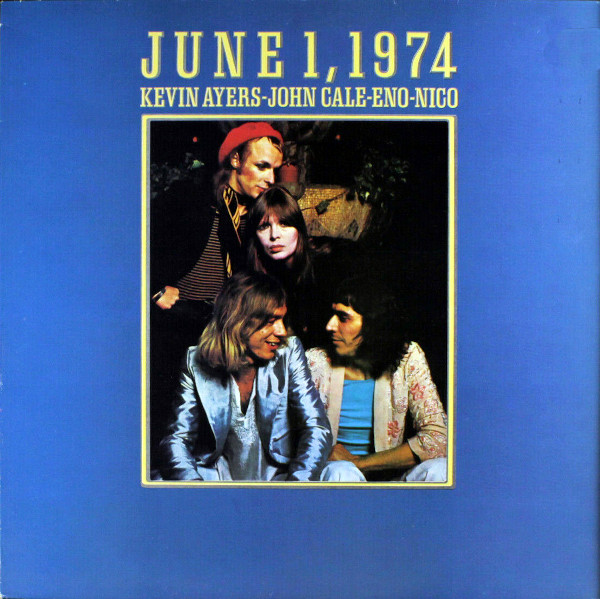 A band of misfits, a side of Ayers and a dose of intrigue converge at the Rainbow.

This album had been the source of speculation on my part for years, as it represented such an unusual axis of talent. And no less a luminary than Dave Thompson has found in June 1, 1974 the nexus of art-rock royalty, or at least enough inspiration to write an entire book around it.

On a superficial level, this is a live album featuring Kevin Ayers and his touring band at the time (The Soporifics) plus a constellation of stars who scored extremely high on the absurdity/profundity scale: Eno, John Cale, Robert Wyatt, Nico. (As if that weren’t enough, Mike Oldfield drops by for a lovely guitar solo on “Everybody’s Sometime And Some People’s All The Time Blues.”) Add to that a little bit of history (a rare and early glimpse of Eno on stage as a solo artist) and an unhealthy dose of drama (Cale had discovered Ayers sleeping with his wife the night before this performance), and you have the makings of a memorable evening.

As to whether this represents a divinely orchestrated alignment of stars, well, not to me. Just the previous year, The Rainbow had hosted Eric Clapton’s return alongside members of The Who, Blind Faith, Traffic and The Faces. To your mainstream musical consumer, Ayers and his ad hoc freakshow must have seemed like amateur night by comparison. Of course, the two revues are worlds apart. The Clapton concert sought to recapture lost ground, while Ayers and his allies were writing a new rock manifesto.

Eno handles the role of opening act surprisingly well; “Driving Me Backwards” comes off without a hitch and, though overdone, “Baby’s On Fire” does contain a scorching solo in the middle. Cale contributes what is handily the oddest version of “Heartbreak Hotel” you’ll ever hear, made all the richer by the personal context behind it. The first side ends, how else?, with a version of The Doors’ “The End” by Nico that delivers the goods as only Nico can.

The second side of the elpee features a handful of tracks from Ayers that move adroitly from one to the other. The breezy “May I?” is a highlight. His performances suggest a cross between Lou Reed, Bob Dylan and Bryan Ferry, with the caveat that Ayers is the prototype, not the copy. If June 1, 1974 isn’t as good as I expected, I expected a lot. My main knock on the album is that there isn’t more of it, and what there is of it (mostly Ayers) is what I was least interested in. A suitable appreciation of Ayers may come with time, however, so I reserve the right to gripe about too little Ayers layter.