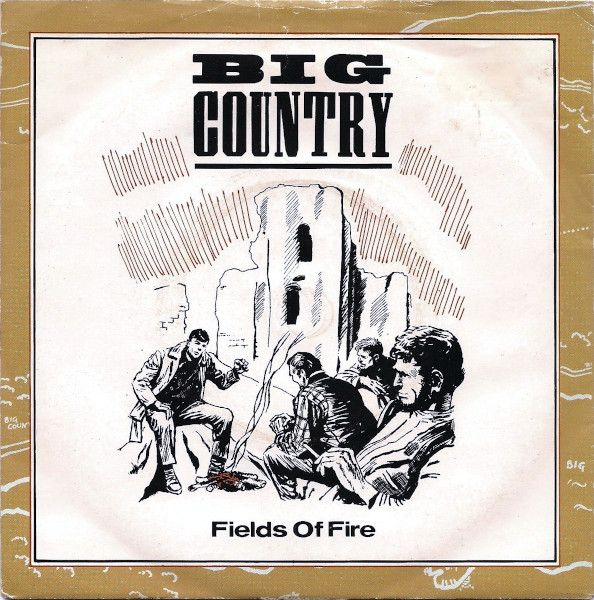 The song that introduced the world to Big Country and the e-bow.

Kronomyth 0.2: Before the crossing and the rest.

Fields of Fire was Big Country’s big breakthrough, introducing the world—well, part of the world anyway—to the band’s uniquely Scottish sound. It’s a fiery number that has all the ingredients of a great Big Country song: bagpipe guitars, impassioned vocals and a heroic resolve to do battle against life’s crushing blows. I guess there’s some irony there. Or sadness. Or both.

Good promotion, which included a music video, and the band’s natural visual appeal certainly didn’t work against the single’s success. It’s honestly not one of my favorites over their career; great sound but not necessarily a great song. Then again, by the time I heard this I had already fallen in love with “In a Big Country.” If I had heard “Fields of Fire” first, my earliest affections for the band might lie there instead.

Angle Park was produced by Steve Churchyard during the aborted sessions for what would eventually become their first album, The Crossing. It’s a very different sound for the band, closer to The Cure than the Big Country we all know and love. Still, definitely one worth salvaging. It later turned up on the Wonderland EP.

In Canada, a different B side was selected, Close Action. Like “Fields of Fire,” it’s identical to the version that turned up on The Crossing. I love the chorus on this song. Honestly, there isn’t a song from the band’s early days that doesn’t sound like the world depended on it. Some days, it still does.

*Some copies show the songwriting credits as “Big Country.”