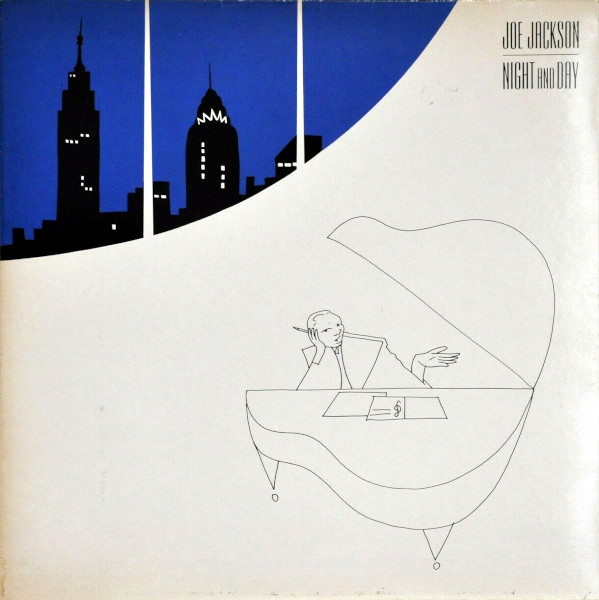 Sophisticated Latin jazz and smartly executed pop music meet in the middle on this wonderful album.

Kronomyth 5.0: Step into another world.

It’s tempting to see this as another reinvention (I usually do), but it’s more about Joe Jackson taking himself seriously as an artist. Jumpin’ Jive was a reinvention; Night and Day is a refinement. The person who wrote “(Do The) Instant Mash” is the same one singing T.V. Age. And Jackson had already introduced his softer side on the second album: “It’s Different for Girls,” “Amateur Hour.” So the difference here isn’t the muse, it’s the music.

There’s no guitar on this album and the bass is subdued. The real action occurs between the piano and the percussion. The result is sophisticated pop music with a Latin flavor, a complex cabernet next to the overcaffeinated soda pop of Look Sharp! In case you missed the sophistication, you’re reminded of it by the cover, the interior gatefold photo, the Duke Ellington quote at the end. Jackson seems to enjoy role-playing as much as writing, but maybe that helps inspire him. And Night and Day is an inspired record: Breaking Us In Two and Steppin’ Out are two of his best, A Slow Song, Real Men and Another World just a notch below.

At the time of its release, Night and Day was almost as much of an anomaly as Jumpin’ Jive. Popular music was becoming increasingly electronic, and here was Joe Jackson producing defiant, handcrafted melodies that our parents would probably like. It wasn’t an instant with me. Instead, Night and Day waited patiently for me to come around to its way of thinking. It succeeded in winning me over because of the quality of the songs, and for a time it seemed that Joe Jackson was destined to lead a charmed life. With each new twist and turn, however, Jackson has lost some followers.

Today, this artful anachronism isn’t heard as a reaction to anything. Whatever the imaginary battle lines being drawn by Jackson, Night and Day survives not because it is a valiant effort against the crushing forces of complacent pop music, but because great music is timeless.

All songs written by Joe Jackson unless noted.