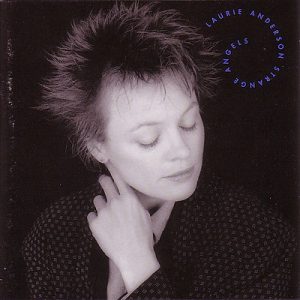 Kronomyth 5.0: POP ART. Laurie sings! And the world doesn’t end. Maybe some pigs flew, I don’t know. They probably needed the exercise anyway. By most accounts, the result was a revelation: a very musical album from an “antimusical” musician. But to contradict the opening title track, it’s exactly like I thought it would be. Strange Angels isn’t that much different from Mister Heartbreak after all. It’s chatty, smart, funny. Groundbreaking? Not really. Peter Gabriel brought African music into the digital age on Security and So, David Byrne took it to South America several times, and Laurie Anderson retraces their footsteps on Strange Angels. The difference is that Laurie is the better listener, internally and externally. She stumbles on big truths and little epiphanies, wraps them here in jewel-encrusted boxes and dazzled a whole lot of people with the offering. Throw away the box, though, and it’s another “Langue d’Amour” or “From The Air.” What I think attracts people to Strange Angels is the musical packaging. It’s by the far the prettiest record she’s made, and thus the most charming. “Babydoll” and “My Eyes” are seductive pop songs; complicated under the surface, sure, but for the first time Laurie is giving audiences the opportunity to opt out of the social study and simply enjoy the music. Yet it’s when audiences enjoy the album on both levels (surface and substance) that Strange Angels weaves its best magic. I got as much of a kick out of her earlier music (Big Science, Mister Heartbreak), and can find the beauty in ugliness just as easily, so for me Strange Angels is simply the same wonderful gift wrapped in different paper. It’s lovely paper, shiny and colorful, so you may want to unwrap it first.

Words and music by Laurie Anderson unless noted.

The Pictures
Design by M&Co. Photography by Robert Mapplethorpe.