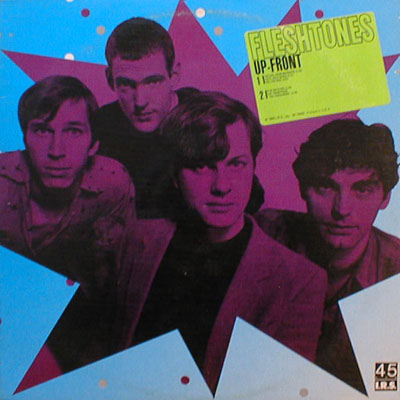 The perfect appetizer for the post-punk garage rock sound you were craving (or not).

This formal introduction to Fleshtones includes the delightful “Cold, Cold Shoes” and a handful of retro garage rock numbers with names like “The Girl From Baltimore” and “The Theme From ‘The Vindicators.’” (Rick and Morty forever and forever 100 years some things…) In the early ‘80s, I.R.S. was introducing new bands at a breakneck pace, some of whom stuck (The Police, The Go-Go’s) and most of whom had but one shining moment and soon disappeared into obscurity or the indie label swamp (Fleshtones, Skafish, The Payola$). “Shoes” is that shining moment for Fleshtones, a tightened-up version of ‘60s garage rock that gets under your skin in a hurry.

The rest of Up-Front is good for a one-time jolt of retro rock revival, although you wonder if the band isn’t a one-trick pony. The band’s first full-length album, Roman Gods, proved they could sustain the rock ‘n roll party atmosphere over an entire elpee. Up-Front was later appended to the reissue of Roman Gods, providing an appetizer for that party platter.