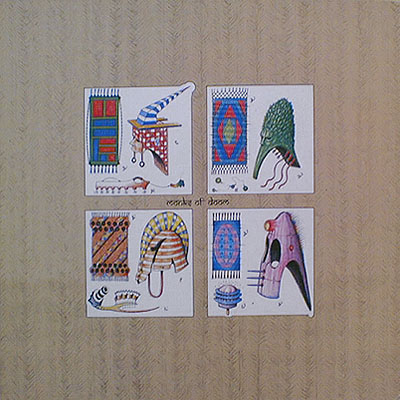 The rest of CVB on a camping holiday without David Lowery, which is as interesting as you’d think.

“Not a day at the beach, but work” I recall thinking when I first bought this. Listening to it again, years later, Breakfast on the Beach of Deception caught my ear as a mix between King Crimson’s discipline and Butthole Surfers’ childish indiscipline. A sort of Surfer King, if you will, he wrote innocently.

The record gets off to a great start. “In Anticipation of the Pope” is the kind of monster you expect from prog choppers like Mike Keneally, then a track with Victor Krummenacher’s creepy vocals, followed by some quasi-Jamaican space spelunkering on “Facts About Spiders.” Beach reminds me of those starter kit rock collections you could buy in toy stores: there’d be some shiny ones, dull ones, spiky ones and smooth ones, laid out like candy you couldn’t eat. You wouldn’t want to make a meal out of this record, couldn’t even if you wanted to, because its purpose is to get the poison out: release all the weird ideas and demons into the wild magnetic beyond.

It doesn’t sound like the Monks arrived at Beach with heldover ideas or songs that couldn’t fit in Camper. They just didn’t arrive with a vocalist or a violinist, which allowed them to unleash their instruments and pursue nontraditional structures that would ordinarily be hard to sing around (e.g., “Visions from the Acid Couch”). The component I can never get my arms around in describing this music is a kind of Armenian/Greek folk element that appears in the guitars sometimes (it appeared in Camper too as a sort of gypsy spirit). I have no idea if it’s really Armenian or Greek, I’m only saying that because it sounds Greek and because I don’t work Armenia into my reviews often enough (The Who notwithstanding).

While Beach is a good first record, it’s still an experimental, instrumental pet project. The real attraction in the zoo (the lion in the room) remained Camper Van Beethoven. Still, Monks gave them somewhere to go when Camper folded, so you can see this album as setting up an alternative camp even further out on the fringes. And, no, there was no film called Breakfast on the Beach of Deception; that’s the deception.