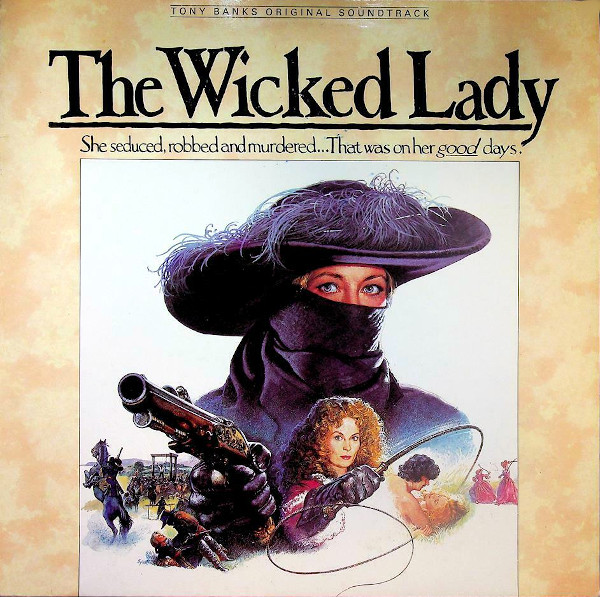 Banks provides the score in this film beloved by Star Trek fans everywhere.

Kronomyth 1.5: A curious feeling up.

Faye Dunaway in tight leather pants with a whip? Okay, I’m with you so far. Actually I’ve only seen part of this film. The lousy part, I’m guessing, since I don’t remember no whippin’. What I did remember was that Tony Banks scored this film, so when I found a wicked cheap copy of this in a used record store, I pounced on it. All right, it was more of an elated bunny hop.

As soundtracks go, this is kind of unusual. The first side contains short instrumentals written by Banks and played on various synthesizers; similar in sound to The Fugitive if not nearly so fleshed out as a “Charm” or “Thirty-Threes.” But the producers didn’t use Banks’ modern music for a film set in the 17th century. Instead, Christopher Palmer created a classical score based on Banks’ music, which is what appeared in the film. It’s interesting to hear Banks’ synthetic inventions reinvented for orchestra, and in interviews Banks has cited the experience as an inspiration for his own foray into the classical field, Seven.

Over time (which I apparently have a lot of), The Wicked Lady is growing on me. It’s soothing to sit down with, no worse than some of Anthony Phillips’ instrumental CDs and better than Banks’ Soundtracks. Of course, lots of records are better than Soundtracks. Smallcreep’s Day was a better record than Soundtracks. So, unless you’re intent on collecting everything by Banks or have fond memories of this film (and the gratuitous whipping that I’m assuming took place somewhere), you don’t need to trouble yourself with this soundtrack. I know there are some who will chafe at the idea that this (still) hasn’t been released on CD, but consider it a kindness. Some things are better left to the imagination, like soundtracks to forgotten movies or Marina Sirtis.

All music composed by Tony Banks.